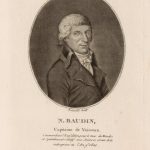 Nicolas Baudin is primarily known as the leader of a major voyage of scientific discovery that visited the shores of Australia at the dawn of the nineteenth century (1800–1804), but his earlier life and career were just as full of adventure and drama.

Nicolas Thomas Baudin was born on 17 February 1754 in the small port town of Saint-Martin on the Île de Ré, off the west coast of France. After some early experiences on merchant ships, he joined the French navy in 1775. In 1778, he was sent to the Americas, where the French government’s decision to give formal recognition to the United States had led to a resumption of hostilities with Great Britain. During his time in these waters, Baudin was captured twice by the British, escaping from prison on the first occasion, and finding himself liberated in a prisoner exchange on the second. When he returned to France in 1779 he was already a seasoned adventurer.

In 1780 Baudin received his certificate as a merchant captain and was given command of the Apollon, whose mission was to escort a convoy to the Île de France (Mauritius), then under French rule. He was soon replaced, however, by an officer of noble birth. This act of class discrimination prompted Baudin to resign from the French Royal Navy and pursue a career on merchant ships, plying the route between France and the Americas. In July 1786, a group of Frenchmen from Louisiana commissioned him to transport a cargo of supplies to Mauritius. En route, at the Cape of Good Hope, he met Franz Boos, the botanist and head gardener of the Austrian Emperor. Boos had been sent to collect exotic plants in the Indian Ocean for the Emperor’s gardens and was seeking passage to Mauritius. Baudin duly obliged, and during the voyage struck up a friendship with Boos, who taught him much about collecting and transporting plant and animal specimens. Boos subsequently commissioned Baudin to transport him and his collections back to Europe.

The success of this voyage inspired the Austrians to entrust Baudin with two further missions. During the first—a covert trade mission to China and the Far East—he compiled on his own account a collection of plants and animals which circumstances forced him to leave for safekeeping on the island of Trinidad on his way back to Europe. The second was a botanical voyage which he again sought to harness to his own ends by setting sail for New Holland. Although he was thwarted in his efforts by two hurricanes, Australia was now on his radar.

Following his return to France at the end of 1795, Baudin went to see the director of the Natural History Museum, Antoine-Laurent de Jussieu, to seek support for an expedition to recover the collection of plants and animals he had left behind in the Caribbean. The Museum was quick to endorse this venture, for which governmental approval was readily granted, and on 30 September 1796, Baudin sailed out of Le Havre in the Belle Angélique, bound for Trinidad. He arrived at his destination in April 1797 only to find that the island was now in British hands. To Baudin’s frustration, the British commander refused to grant him access to his collections, so Baudin headed to the nearby Spanish colony of Puerto Rico to compile a fresh collection of natural history specimens. When the Belle Angélique returned to France at the end of May 1798, its precious cargo was unloaded and sent to Paris, where on 28 July it was paraded through the streets. One week later, on 4 August, Baudin was at last reinstated in the French navy with the rank of post-captain.

Spurred on by this success, Baudin put together a proposal for an ambitious new voyage of circumnavigation, encompassing South America, California, various Pacific Island groups, the east and west coasts of Africa, and the south-west coast of New Holland His Museum friends welcomed his project and designated a commission to develop the plan, which was presented to the First Consul on 25 March 1800. Bonaparte agreed, but reduced the scope of the expedition to New Holland, Van Diemen’s Land (Tasmania) and New Guinea. Two ships, renamed the Géographe and the Naturaliste, were selected and a contingent of twenty-two scientists (including three artists) was appointed. On 19 October 1800, the two corvettes left Le Havre, reaching Tenerife on 14 November 1800, then Mauritius on 16 March 1801. From there, they sailed for New Holland, making landfall near Cape Leeuwin on 27 May. Heading north, they made their first major geographical discovery: Geographe Bay, named in honour of Baudin’s ship. The Géographe and the Naturaliste (commanded by Emmanuel Hamelin) became separated in a storm, but both continued their explorations northwards, visiting key sites (Rottnest Island, the Swan River, Shark Bay) before being reunited in Timor in August. The expedition left Kupang Bay on 13 November 1801, bound for Tasmania.

The exploration of Tasmania produced some of the major achievements of the voyage in the form of improved charts and the collection of numerous plant and animal specimens. Of particular significance was the anthropological documentation resulting from the many interactions between the French and the local Aborigines, which is still the source of study and debate today. The geographical work continued with the exploration of Bass Strait and the charting of the south coast of the Australian mainland, during which Baudin met Matthew Flinders coming from the opposite direction (8 April 1802). After exploring the two South Australian gulfs, Baudin sailed to the Nuyts Archipelago, where contrary winds and dwindling supplies forced him to break off his survey and head for Port Jackson for some rest and replenishment. He was reunited there with the Naturaliste, from which the Géographe had become separated during a storm off the east coast of Tasmania.

The Sydney sojourn (June–November 1802) was highly productive. The governor of the colony, Philip Gidley King, provided generous hospitality and the French continued their scientific work while repairing and reprovisioning the ships. It was here that Baudin decided to send the Naturaliste back to France with all the natural history specimens collected to that point. To replace it, he purchased a ship he named the Casuarina, whose shallow draught would allow for closer in-shore surveying. Louis Freycinet, a lieutenant from the Naturaliste, was selected to command it.

On leaving Sydney, he headed for King Island, where he farewelled the Naturaliste. From there he returned to the south coast of the mainland. In January 1803, Baudin became the first to circumnavigate Kangaroo Island, which today bears many of the names conferred on its features by the French. Freycinet charted the two South Australian gulfs while Baudin stayed on the island. The expedition then visited Nuyts Archipelago, this time managing to chart the mainland behind the St Peter and St Francis Islands. From there, the French continued west, stopping at King George Sound before rounding Cape Leeuwin and heading north to Rottnest Island, Shark Bay and the north-west coast, once again leaving a lasting trace in the many names they conferred. A return to Timor became necessary to replenish supplies before undertaking the final section of their survey: the north coast of Australia through to the Gulf of Carpentaria. On 7 July 1803, however, Baudin decided to turn around and head for home: the winds would not allow him to make any headway and his health had seriously deteriorated. The expedition was now effectively over. Baudin arrived in Mauritius on 7 August 1803 and was taken in by an old friend, Madame Alexandrine Kérivel, who cared for him during the last stages of his pulmonary illness, until his death on 16 September.

History has not been kind to Baudin, the campaign of vilification led by some of those who had accompanied him proving to be a persistent legacy. Recent scholarship, however, has served to re-establish his reputation and Baudin’s name is now celebrated in those parts of Australia where he left an enduring trace. New monuments are also being erected in his memory. Through this form of public homage, Baudin can finally be seen to occupy his rightful place in the pantheon of Australian explorers.