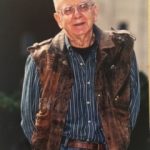 Leigh Ross Chambers was a brilliant scholar and University teacher, working in the areas of French Studies and Comparative Literature. He spent the first eighteen years of his career in Australia, subsequently moving to the United States.

He was born in Kempsey, NSW, Australia, on 19 November 1932. He began his university studies at the New England University College (affiliated with the University of Sydney) in 1949, gaining 1st class honours in French in 1952. After his honours year, he enrolled in a Diploma of Education, but interrupted his studies to take up a two-year teaching position as Assistant d’anglais at the Collège moderne de Reims. In Reims he honed his linguistic skills and immersed himself in French intellectual life. He also enrolled for a Doctorat d’Université titled Le vocabulaire particulier et la culture de l’industrie viticole à Reims, du moyen âge à nos jours, but finally abandoned this project for lack of material.

Chambers returned to Australia in 1955 to complete his Diploma of Education. After teaching French and German briefly at Sydney Boys’ High School, he was appointed in 1957 to a Lectureship at the University of Queensland, before being appointed as a Lecturer at the University of Sydney in 1959. In this year he was also awarded an MA with 1st class honours for his thesis on L’importance de l’anglicisme dans le français contemporain. On one of his frequent visits to France around this time he became a member of the experimental literary group, OULIPO (Ouvroir de littérature potentielle), founded by Raymond Queneau and François Le Lionnais.

In 1967, Chambers was awarded a Doctorat d’Université from the University of Grenoble for his thesis on Nerval, supervised by the eminent scholar of Romanticism, Professor Léon Cellier.

In 1972, Chambers returned to the University of Sydney when he was appointed to the McCaughey Chair of French, succeeding Professor Ian Henning who had held the Chair since 1946. In his application, Chambers outlined his philosophy concerning the tertiary study of French, and reflected on the discipline:

It is my firm belief that linguistics and history provide the two main methodological models on which modern language studies should be built.

The early 1970s was a time of expansion and renewal in Australian universities and Chambers took advantage of the possibilities offered to remodel radically the Sydney department in accordance with his vision. In three short years Chambers brought about many changes, transforming the department through curriculum reorganisation and teaching innovation. Chambers emphasised the importance of a methodological underpinning to studies in French and widened the curriculum to include the study of linguistics and the social sciences. To reflect the new directions in which Chambers was taking the discipline, the expanded focus led eventually to the change in the department’s name from French to French Studies.

During his time in Australia, Chambers established himself as an original and trail-blazing thinker, both as a pedagogue and researcher. When he began his academic career, his interest turned to the study of nineteenth- and twentieth-century French literature, with a particular focus on theatre and poetry. Thus, he published on Beckett, Artaud and began work on Nerval. His first three books: Gérard de Nerval et la poétique du voyage (José Corti, Paris, 1969); La Comédie au château : contribution à la poétique du théâtre (José Corti, Paris, 1971) and Spirite de Théophile Gautier : une lecture (Lettres modernes, Paris, 1974), were written during this period.

In 1975, Chambers was appointed to a Chair at the University of Michigan in Ann Abor and was a member of the Faculty until his retirement in 2002. His move to the United States signalled his continuing interest in cultural phenomena, in keeping with his vision of the role of the scholar in modern language disciplines. Refining his views on text and narrative, he was now going beyond the confines of ‘French Studies’ properly speaking and consequently began publishing mostly in English. His ground-breaking work on the nature of fiction, Story and Situation: Narrative and Seduction and the Power of Fiction (University of Minnesota Press, Minneapolis) was published in 1984.

In 1985, when he was appointed to the Marvin Felheim Distinguished University Professorship at the University of Michigan, he transferred half of his position to the Comparative Literature department, thus strengthening that discipline, and at the same time bearing witness to the fact that French Studies (or the study of any other modern language subject), as he had envisioned, was a springboard for wider engagement with society. His subsequent writings as a reader of textuality embodied his continuing subtle analyses of the intersections of the worlds of words and social action, exploring how literary and other texts construct the world as they are constructed by it. His Mélancolie et opposition : les débuts du modernisme en France (José Corti, Paris, 1987) was concerned with French literary production in the wake of the Revolution of 1848; Room for Maneuver: Reading (the) Oppositional (in) Narrative (University of Chicago Press, Chicago, 1991) dealt with the oppositional forces inherent in narrative itself; Facing It: Aids Diaries and the Death of the Author (University of Michigan Press, Ann Arbor, 1998) examined the rhetorical specificities and ramifications of writing by AIDS sufferers; Loiterature, (University of Nebraska Press, Lincoln, 1999) demonstrated ‘digressive waywardness’ in literature as a form of cultural expression. In Chambers’ book, Untimely Interventions: AIDS Writing, Testimonial, and the Rhetoric of Haunting (University of Michigan Press, Ann Arbor, 2004) he focussed on the genre of testimonial writing, as exemplified in writing on AIDS, the First World War and the Holocaust, and explored how society could be haunted by its own history.

After his retirement Chambers continued to be actively involved in many of his academic activities until shortly before his death. Returning to his interest in nineteenth-century poetry, he published in 2015 what was to be his last book, An Atmospherics of the City: Baudelaire and the Poetics of Noise (New York, Fordham University Press).

Chambers was a Fellow of the Australian Academy of the Humanities, the American Academy of Arts and Sciences, and an Officier dans l’Ordre des Palmes académiques (France). His achievements as a scholar and teacher were recognized by many visiting appointments at leading universities, a Distinguished Faculty Achievement Award at the University of Michigan (1992), and an honorary doctorate from the Université de Neuchâtel, Switzerland (2001).

He was a much-loved teacher, friend and mentor to generations of students. He died at the age of 84 on 18 October 2017 in Ann Arbor, Michigan, after a brief illness.