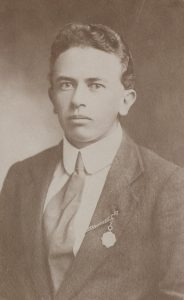 Alan Chisholm was born on 6 November 1888 in Bathurst, New South Wales, the last of the five children of William Samuel Chisholm and Madeline Eliza, née Heagren. His parents both belonged to families that had emigrated to Australia in pre-Victorian times. There was a clear awareness of a Scottish-Gaelic heritage that existed on both sides, although this was complicated in his mother’s ancestry by Scandinavian and German elements. This background was not untypical for early colonial settlers in Australia. In 1894, after many years in Bathurst, Chisholm’s coach-painter father moved the family to Minore on the Dubbo–Bourke road and railway and then, till 1898, to Dubbo itself. During this time Chisholm was effectively home-schooled, but, as the first of his books of reminiscences, Men were my Milestones, makes clear, he was acutely and imaginatively sensitive to his rural and country-town environment.

A shift to Milson’s Point on the northern side of Sydney Harbour, ended this phase of what could too easily be seen as provincial marginality. Characteristically it was a classic case of promotion of talent that had many parallels in the New South Wales of the time and an uncanny resemblance to the world of the French Third Republic. The key was, of course, a swiftly evolving centralized system of public education designed for people of modest means and strong—dare one say Scottish?—aspirations for intellectual advancement.

By late 1900 the conventional and rather stifling Milson’s Point Public School was abandoned for Nimrod Greenwood’s North Sydney Superior Public School, where the ambitious boy was fed mathematics, English literature and eventually Latin and a little French. When in 1905 he was accepted into the Fort Street Model School headed by the celebrated Alexander James Kilgour, Chisholm’s opportunities to progress in languages were very much increased. With teachers like George Mackaness and Henry Tasman Lovell the atmosphere was more than conducive to intellectual development and to purposeful study. Success at the Junior Public Examination in June 1906 led Chisholm to a post as pupil teacher at William Street Public School in October of that year. In 1907 he combined, in the style of the time, this activity on an annual salary of £50 with preparation for the Senior Public Examination and for entrance to the Teachers’ College. By the end of the year all this had been well completed and Chisholm—aged 19—was ready for his tertiary education.

In Men were my Milestones Chisholm provides what he calls a ‘group portrait’ of the University of Sydney as it was in his three years as an undergraduate. Not all the courses and teachers met with his approval, but, concentrating on Latin, French and philosophy, he was able to profit from the mixture of Scottish and German influences that characterized the ‘Sydney model’ of the time. Charles Badham (1813–1884) was long since gone, yet through his pupils and admirers, the Sydney Faculty of Arts remained unusually receptive to Continental Europe as well as to the Celtic fringe. Glasgow and Edinburgh sat comfortably enough with Berlin and Jena in this milieu where Honours students worked the whole year round, with examinations in both November and March. Chisholm did very well—he was above all an accomplished Latinist—thus creating a sound basis for his future career. However, he was also strengthened in his private literary and poetic vocation, a tendency much encouraged by his fellow student Randolph Hughes (1890–1955), who became a lifelong confidant and mentor.

For nearly a year and a half after graduation Chisholm taught for the New South Wales Department of Education in city and country schools. It was the moment when the system of secondary education was being extended and reorganized in an effective way. The award of a departmental travelling scholarship to the promising young teacher could be seen as part of this. Indeed he was allowed to spend two years away, first in Berlin at the Tilly Institute, then in Paris, and finally in Leipzig. Apart from obtaining phonetics diplomas from Wilhelm Viëtor and Paul Passy, Chisholm quickly made himself at home in German as well as widening his knowledge of French culture and literature. It was an excellent preparation for his appointment as Lecturer in French and German at Sydney Teachers’ College. The work continued up to late 1915 and was made heavier by additional tasks at the University of Sydney helping out his old teacher G. G. Nicholson (1875–1948), who had been called to wartime censorship duties.

1915 was also the year of what seems to have been a disastrous first marriage—on 24 September to Laurel May Genge. By the time a son—John Angus (1916–1978)—was born to the union, Chisholm had been six months a volunteer in the AIF and was preparing for a posting to the Western Front. After an eventful war, in which he was mostly at listening posts and then an education officer, he did not return to Sydney Teachers’ College till the middle of 1919. There followed eighteen months of fruitful activity: the renewal of courses, with a literary emphasis; editorship of the Modern Language Review of New South Wales; a deepening friendship with Christopher Brennan. Chisholm’s successful application to replace Fernand Maurice-Carton as Head of French at the University of Melbourne was, therefore, hardly astonishing.

Chisholm occupied this position from 1 March 1921 till 31 January 1957. Sabbatical leaves in 1926 and 1936 offered his only escapes to Europe. A Senior Lectureship came fairly quickly in late 1922, but promotion to Associate Professor (1930) and full Professor (1938) was slow. The correspondence with Randolph Hughes reveals that Chisholm was more than once tempted by chairs in Britain, but his applications were never successful. Yet he was unashamedly Australian. The attraction lay not just in Hughes’s urgings, but in the niggardliness and stultifying atmosphere of Melbourne in particular and Australia in general between the two World Wars. It is not that everything changed miraculously after 1945. On the contrary there were clear signs of intellectual autonomy before 1914, so the 1920s and 1930s must be seen as a time of retreat and of loss of nerve. This diagnosis is not hidden in some of Chisholm’s later writing.

The French scholar’s personal circumstances were also painfully difficult, in particular during his tenure of the Chair. He had remarried—to Lillian Nora Mulholland—on 1 November 1923 and the couple had had a daughter, Amélie (‘Mimi’) Madeline Alice (1924–2009), but Mrs Chisholm suffered for decades from severe physical and psychological illnesses. It has been suggested that the Professor’s stoicism and capacity for tireless work in these circumstances were due to the powers of concentration he had developed as a voracious student and reader at the Front in 1916–1918.

There can be no doubt about the achievements in teaching, in productive scholarship and in participation in public life. Although Chisholm did not abandon Nicholson’s insistence on hard work and rigour, he shaped through his interest in literary creation and sensitive exegesis a department that was markedly different from the one in Sydney. A real concern with teaching is evident in the Manual of French Pronunciation and in editions of Chateaubriand and Gautier that he published. Then there were the many books and articles, published both in Australia and in the Northern Hemisphere, on nineteenth- and early twentieth-century poetry. These were the foundation of the ‘Melbourne School’ carried on by several Chisholm students around the world. Original poems were also part of the record. Chisholm always wrote clearly, concisely and elegantly; prolixity was completely foreign to him. It could be that these qualities helped him in the heavy administrative load he took on outside his own department: stints as Dean of the Faculty of Arts, member of the University Council and Chairman of the Library Committee. Beyond this were his roles in defending the Free French cause during World War II and in promoting associations for secondary and tertiary teachers of languages.

Retirement brought freedom from administration—increasingly burdensome in universities even then—and above all the opportunity to write. A two-year return to Europe, with a great deal more time spent in London than anywhere else, consumed much of the period 1958–1960. Research, editing, creative composition and meditation continued, and the fruits of all this appeared throughout the 1960s and on into the 1970s. Chisholm’s rather meagre pension had to be augmented in these inflationary decades by bread-and-butter tasks, notably regular book reviews for the Melbourne Age. His wife died in 1968, but with his daughter he stayed on in his Toorak house till near the end in 1981. His publication list embraced two volumes of memoirs, studies of French poets, editions of Brennan and Shaw Neilson, his own verse in English and Latin, and more besides. He did not abandon his interest in other languages and literatures like Italian, Spanish and even Arabic, but he assumed his Australianness without fuss.

It was natural that such an imposing body of work and public commitment should be recognized by governments and academic peers. Chisholm was an Officier de la Légion d’Honneur and an OBE. The Australian Journal of French Studies organized a substantial Festschrift for him in 1969, and Monash University awarded him an honorary degree two years later. He was also a Foundation Fellow of the Australian Academy of the Humanities in 1969 among other distinctions.

Modern clichés concerning radical academics miss the point about the university teachers of Chisholm’s generation. They were often, as he was, politically conservative and inevitably burdened by now condemned prejudices. However, courtesy, civility and respectfulness were part of the armoury of this man of exceptionally small stature. His deep and confident voice—tinged in French with an Australian accent despite his studies of phonetics—remained strong and unforgettable in the occasional lectures he gave as late as the 1970s. His position near the top of the hierarchy of Australian French specialists is secure.

Photograph: ‘A R Chisholm as a young man’, University of Melbourne Archives