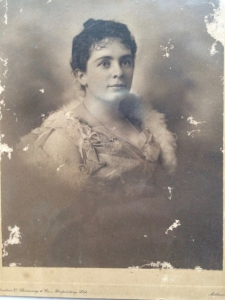 Doyenne of the Melbourne French community for many decades, Charlotte Crivelli was also a prominent member of the wider elite of the city. Through her strong connections with decision-makers in the political and business worlds she was able to play a major role as a fundraiser for the French Red Cross and the French Mothers and Children Association during the First World War, and for the French reconstruction effort in the post-war period.

Charlotte was not yet six years old; she was to spend the rest of her long life in Australia. Little is presently known of her early years or her schooling, but among her childhood (and lifelong) friends were Margaret Mary Callan, future Mrs John Gavan Duffy, and Jessie Simson, daughter of the eminent pastoralist Robert Simson, and future wife of L. K. S. Mackinnon, of the family which owned Melbourne newspapers The Argus and The Australasian. In her late teens and early twenties, Charlotte studied art and craft with Berthe Mouchette, founder of the Melbourne Alliance Française, and there are newspaper reports praising the originality of talent and her ‘clever’ work in tapestry imitation paintings and ceramic decoration in various exhibitions.

In 1887 Charlotte married Marcel Urbain Crivelli, a young doctor recruited from Paris by Dr Duret in anticipation of his retirement and return to France, to take over the thriving practice he had established in Albert Park. Over the next twenty years, the couple had seven children, six boys and a girl.

Charlotte’s first foray into public life was in the Victorian Alliance Française, which she joined as a committee member in 1902. She played a highly controversial role in the conflict which occurred when the then French Consul, Paul Maistre, attempted to bring the local Alliance more into line with the Paris mother-house’s goals and principles. As présidente-adjointe, Charlotte sided with those Melbourne establishment women —such as Lady Clarke and Lady Holroyd—whom Maistre rightly criticised as treating the Alliance primarily as a Melbourne social institution rather than as a vehicle for the promotion of French language and culture. She used her not inconsiderable Paris contacts to help effect Maistre’s recall. This episode reveals both her inveterate social snobbery and her conviction that her power of action in Melbourne depended more on her Anglo-Australian friends than on the French authorities. She none the less remained a proud French patriot. Her homes in Melbourne, in Albert Park and later in South Yarra, were named ‘Arrou’, in memory of her birthplace.

It was during the First World War that Charlotte Crivelli made her most significant contribution. Ignoring the official French consular processes, she undertook a major fundraising campaign across southern Australia, as representative of both the French Red Cross and the Société d’assistance maternelle et infantile. Perhaps spurred by the fact that three of her sons were serving in the French army (they would be joined by a fourth late in the war), she demonstrated tireless energy and exceptional organisational and networking skills throughout the course of the war and into the post-war period, galvanising and guiding the generosity of the Australian public into support for the French war effort. In the city of Melbourne, she was able to depend on the assistance of people like the Lord Mayor, the Chief Justice, the Victorian Governor, the President of the Australian Branch of the British Red Cross (Lady Munro-Ferguson was also the wife of the Governor General of Australia), and many leading business people. But she tapped into regional and rural communities as well, and set up committees in Tasmania, South Australia, Western Australia and Queensland. Overall, she was responsible for raising the equivalent of over $20 million in today’s currency.

When the war ended, she continued to raise funds for France’s reconstruction, and was a central figure in the committee formed in Melbourne to ‘adopt’ the town of Villers-Bretonneux in the Somme, the site of an iconic Australian victory in 1918, now famous as the town that ‘never forgets Australia’, and the home of the Sir John Monash Centre, which opened in 2018 as an ‘interpretive centre’ within the Australian National Memorial for Australian service men and women who served on the Western Front.

In the 1920s and 1930s, the Crivellis remained active in Melbourne society. In addition to her continuing work for French reconstruction, Charlotte regularly threw her weight behind causes she thought important, such as the South Yarra St Vincent’s Hospital Red Cross Auxiliary, of which she was a long-term vice-president and president, or assistance to the victims of the floods that devastated France in 1930. During the Second World War, at almost 80, she directed her energies to the support of the Free French. In 1937 she received the Médaille de bronze de la famille française, and in 1947 was honoured as a Chevalier de la Légion d’Honneur. In the course of her life, she suffered personal loss. Her second son, Georges, died as a result of war-related illness in 1923, and his young brother Marcel junior (‘Billy’) died of cancer in 1949.

Her last decade was devoted to family. After the death of her husband, Dr Crivelli, in 1948, two investment properties ensured material comfort; she was well cared for by the three sons (René, Paul and Roger) who had remained in Australia. She communicated regularly by letter with the family of her oldest son Louis, who had moved to France in 1932, and with her daughter Hélène, who had entered into religious life in France in the mid-1920s. Charlotte Crivelli died peacefully in her South Yarra home on 30 March 1956 aged 92, and is buried beside her husband in the St Kilda cemetery.