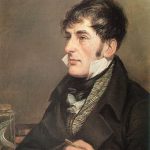 Charles-Alexandre Lesueur was born in Le Havre on 1 January 1778, the fourth child of Jean-Baptiste Denis Lesueur, an Admiralty employee, and Charlotte Thieullent, daughter of a sea captain. After Charlotte’s death in 1794, the children were cared for by their maternal grandmother, while their father sought, through varied business ventures, to make his fortune. Although Jean-Baptiste failed in his grand plans, he succeeded in assuring his children’s wellbeing and remained particularly close to Charles-Alexandre.

Little else of Charles-Alexandre’s early years is known, except that he attended the College of Le Havre, where he enjoyed some academic success. In 1793, he was a member of the local cadet battalion, and from 1797 to 1799, he was enrolled in the National Guard of Le Havre. After a short period of service in the Navy, he was exempted from active service on medical grounds and found employment as a clerk. Although there is no record of any formal training he received, his talents as an artist were known in 1800 when he was recruited—albeit nominally as an assistant gunner—by Captain Nicolas Baudin.

Lesueur’s destiny thus took shape when he embarked on Baudin’s scientific voyage of discovery to Australia in October 1800. It was the prospect of a career that had prompted the young man to seek a place on the expedition, against his father’s wishes. In a letter from Mauritius, Lesueur reassured Jean-Baptiste that all the promises made to him had been honoured and that his occupations were ‘to draw natural history subjects, to go hunting and to assist the commandant’s secretary’. It was also at Mauritius that the senior artists designated by the Government left the expedition, which enabled Lesueur and his fellow recruit, Nicolas-Martin Petit, to be elevated to the status of official artists.

During the voyage, Lesueur refined his skills as a natural history artist under the tutelage of the zoological team, and particularly through his collaboration with the gifted young scientist François Péron. Although the voyage proved long and difficult, Lesueur returned to France on Le Géographe in 1804 with a large body of work to his credit, on subjects ranging from zoology and coastal profiles, to Indigenous scenes and artefacts. During the course of his Australian voyage, Lesueur had also become a naturalist in his own right, having assisted Péron to collect, identify and classify the expedition’s numerous specimens and artefacts.

Back in France, Lesueur maintained his close partnership with Péron. In 1806, they obtained government support to publish the official account of the Baudin voyage. Péron completed the first volume, which appeared in 1807, along with its Atlas. Lesueur worked up the many drawings and sketches for the Atlas, which contained artwork by both Lesueur and Petit, the latter having died tragically in Paris in 1804. Lesueur also completed a set of watercolours on vellum, when competing for a place as an artist at the Natural History Museum in Paris in 1806. Although disappointed by his failure to secure one of the two places available, he maintained a working relationship with the Museum throughout his life.

Meanwhile, his work with Péron continued, as they travelled through France between 1808 and 1809: they visited Paris and its outskirts, the Rhône Valley, and the Riviera, all of these visits leaving their trace in Lesueur’s artwork in the form of landscapes, and depictions of local customs, artefacts and architectural features. When Péron’s state of health worsened, he returned to his family home in Cérilly in the Allier Department of central France. Following Péron’s death in December 1810, Lesueur faced not only the personal loss of his closest companion but also the disappointment of learning that the completion of Péron’s voyage narrative was entrusted, not to him, but to Louis de Freycinet. He coped as best he could by continuing his scientific draughtsmanship, sharing his time between Paris and Le Havre, until, in 1815, he seized the opportunity to resume his life as a scientific traveller.

Scottish philanthropist William Maclure, who was visiting Paris, sought Lesueur’s services as an artist and naturalist to accompany him on his travels in North America. A contract was signed on 8 August 1815 and the two men left France a week later for the United States. After collecting, observing and sketching specimens while they travelled through the south of England and the West Indies, they finally reached New York, then Philadelphia, in May 1816. The next phase of their travels involved a geological survey that took them as far north as the Great Lakes, and concluded with their return to Philadelphia, where Lesueur spent the next nine years employed as an art teacher, natural history artist and engraver. During this time, he became a curator of the Academy of Natural Sciences and contributed regularly to its journal. He also developed close friendships with fellow scientists, particularly geologist Gerard Troost and entomologist Thomas Say.

But his travels were far from over, for in December 1825, Lesueur, along with Say, Troost, and others, joined forces with Maclure and utopian thinker Robert Owen, accepting to contribute to the social and educational experiment of New Harmony. After embarking on The Philanthropist in Pittsburgh, Lesueur and his companions sailed down the Ohio river, in what was known as ‘the boatload of knowledge’, reaching New Harmony on the Wabash six weeks later. Although the New Harmony ‘Community of Equality’ was not long lived, Lesueur remained there for eleven years, engaging frequently in scientific travels in Indiana and neighbouring states, and making personal trips to New Orleans, often sending materials to the Natural History Museum in Paris.

When Lesueur returned to France in 1837, he resided in Paris, working on his collections, before spending his last years with his nephews in the vicinity of Le Havre, at Sainte-Adresse. The drawings from this period are essentially focused on Le Havre and the cliffs of La Hève. In 1838, he bequeathed part of his collections of natural history specimens to the town of Le Havre, which officially embarked upon the creation of a Natural History Museum. Appointed its director in 1845, Lesueur did not live to see its inauguration in 1847, for he died on 12 December 1846. Over the years his descendants have continued to enrich the collections of the Le Havre Museum with Lesueur’s works and artefacts.