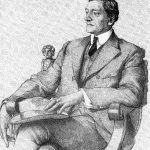 Paul Wenz was born on 18 August 1869 at Reims into a French Protestant family of German origin. His father was well established in the wool trade and owned woollen mills in Reims; the family company imported wool from South America and Australia. Paul was the third of five children, with two older brothers and a younger brother and sister.

From 1879–88 Paul was educated at an exclusive Protestant college in Paris, the École Alsacienne, where he seems to have had an average career. During his school years he befriended fellow pupil André Gide: Gide would later become a helpful supporter in Wenz’s literary activities. Another friend was Joseph Krug, of the famous champagne family.

After school and compulsory military service Wenz had a brief initiation into the family business, decided he didn’t like working in an office, and was sent off to London for a year to learn English and, presumably, to find out more about the wool-importing trade. Wenz’s eldest brother, Émile had already travelled in Australia and New Zealand in 1884, to visit the agents of the family-owned wool-broking agency Wenz & Co. which established branches in Sydney, Melbourne and Perth in 1879. (The agency remained a force in the wool trade until the end of the 1970s.)

Paul Wenz was an active, outgoing young man who had an appetite for travel and the outdoor life—an appetite that he would maintain until the end of his days. At the beginning of 1891 he set off to Algeria to try his hand at winegrowing but, after a year of problems and several bouts of illness, he decided against Algeria. On the advice of his father and eldest brother, Paul set sail for Hobart and Melbourne, where he arrived in October 1892. Very tall (193 cm.), energetic and loving the outdoors, Wenz felt immediately at home in Australia. He spent the next three years jackerooing in Victoria, New South Wales and Queensland and also visited New Caledonia and other islands in the South Pacific. In 1895 he spent several months jackerooing in New Zealand before visiting some estancias in Argentina and Uruguay in 1896.

When he returned to France Wenz announced his decision to settle permanently in Australia as a grazier and immediately began arrangements to emigrate. It was perhaps on the boat bringing him back to Australia in 1897 that he met Harriet Dunne (Hettie), daughter of a wealthy grazier from Melbourne and Netley Station (near Menindee in New South Wales); they became engaged soon after his arrival. At the end of 1897 he purchased, with the help of his family, a large sheep and cattle station called Nanima, on the Lachlan River, about halfway between Forbes and Cowra. He married Harriet Dunne in September 1898 and had a large residence built on his new property.

With Harriet’s help, Wenz prospered as a grazier and made many improvements to Nanima, including the installation of an advanced irrigation system, but he already had other ambitions: he began writing short stories, written in French but set mostly in Australia. The first of these appeared in 1900 in the Paris magazine L’Illustration under the pseudonym ‘Paul Warrego’, a name he would use for several years. L’Illustration would go on to publish a number of Wenz’s stories, most of which had Australian bush settings, although some were also set on South Pacific islands.

Wenz was very impressed with the hardy nature and stoic humour of Australian rural types, and also with the independent spirit of the new Australian Federation. He respected the harshness and strange beauty of the bush and appreciated the experience of bush life. His first stories found a receptive audience in France and in 1905 Wenz published a collection of sixteen stories entitled À l’autre bout du monde. Wenz and his wife sailed to France for a long visit in 1905 and he was able to renew contact with his family and his old friend Joseph Krug.

On his return to Australia he began work on his first and only book to be written in English: Diary of a New Chum was published in Melbourne in 1908, under the pen-name ‘Paul Warrego’. At the end of 1908 the Wenzes became good friends with the American author Jack London and his wife Charmian, who were then visiting Sydney. As a result of this friendship, Wenz undertook to translate into French one of London’s books, Love of Life.

Wenz and Hettie set off for France again in 1909, travelling through South-East Asia and China, thence by Trans-Siberian Railway to Europe. During their long stay in Europe Wenz renewed his acquaintance with André Gide, who was by now an author of some note and closely involved with the newly founded Nouvelle Revue Française. Gide was impressed with his old schoolfriend’s doings and published one of his stories in the NRF. Wenz introduced Gide to the work of Jack London and discussed his proposed translation. The Wenzes returned to Australia in 1910, and that same year there appeared in Paris a second collection of short stories, Sous la Croix du Sud. In 1912 Wenz sent the completed translation of Love of Life to Gide, and the NRF later published the work.

After more travels, this time in South America, and another long stay in France, Wenz and his wife were caught in Reims at the outbreak of war in 1914: they endured the catastrophic bombardment of Reims, and decided to stay on. Wenz became a liaison officer in the Franco-British military hospital while Hettie worked for the Red Cross. In 1915 Wenz was transferred to London as a liaison officer with the Red Cross and, after Australian troops were posted to France in 1916, he had regular contact with Australian personnel, both on his visits to France and in England. During his time in England, Wenz had contacts, through Gide, with several writers, including Joseph Conrad, John Galsworthy and Arnold Bennett.

In 1915 Wenz’s first novel, L’Homme du soleil couchant, written before he left Australia, appeared in serial form in the Revue de Paris. After 1916 Wenz published several stories based on his wartime experiences and wrote a second novel, Le Pays de leurs pères, about Australian soldiers on leave in England, which was also serialised in the Revue de Paris. Back in France at the beginning of 1919 Wenz published two small collections of wartime stories and Le Pays de leurs pères appeared as a book: although it was his second novel, it was the first to be published in book form. In April 1919, Wenz travelled through Morocco as liaison officer and translator with a special Australian trade mission to the French Protectorate.

The Wenzes returned to Australia in November 1919 after an absence of more than six years and Wenz resumed his life as a grazier, apparently putting aside writing for the time being. A few stories appeared in French magazines in the early 1920s, and L’Homme du soleil couchant was published as a book in 1923, but that had been written ten years before.

During the 1920s most of Wenz’s energies were channelled into the running and improvement of Nanima. He eagerly took up new farming technologies as they appeared, and Hettie established a new pig and dairy farm near the neighbouring town of Canowindra. They travelled every year to Sydney for the Royal Easter Show, staying at the grand old Australia Hotel. They also took long driving trips through outback New South Wales.

The Wenzes set off once again for Europe in April 1924. While in France, Paul arranged the publication of a short treatise he had written on Australian sheep-raising methods. He was also engaged to undertake an official mission to report on sheep and wool production in the French West African colonies. Paul and Hettie set off on their adventurous two-month mission in March 1925, travelling by car, train and river barge through Senegal, Mauritania, Niger and Ivory Coast, and making a special visit to the fabled city of Timbuktu. In June, after a break in the Canary Islands, they sailed for Capetown. During their voyage they visited the isolated island of St Helena, the site of Napoleon Bonaparte’s final exile. They arrived back in Sydney at the end of August.

In June 1927 they set off once again for Europe; they spent most of 1928 staying on the French Riviera, with occasional visits to friends and family. Paul Wenz probably undertook some more writing during this stay, and he would have arranged for the publication of several books that were to appear at the end of the decade. Paul and Hettie set sail from France in February 1929, this time accompanied by Paul’s widowed sister Aline and his niece Alice. They disembarked in Fremantle and took the newly completed Transcontinental Railway from Perth to Sydney; Aline and Alice would stay at Nanima for five months.

In 1929, 1930 and 1931 three books by Wenz appeared in succession: Le Jardin des Coraux, a novel set in Sydney and on the Barrier Reef, Il était une fois un gosse, a book of fanciful childhood memoirs, and L’Écharde, a novel set in far west New South Wales. In 1932–33, the Wenzes had another long sojourn in France, but for the next few years Wenz spent most of his time at Nanima. His output during these years was confined to a few short stories, some travel articles and other items in Australian magazines. He engaged more actively after the war with literary colleagues in Australia and with the Australian literary scene in general, maintaining friendships with Chris Brennan, Miles Franklin, Dorothea Mackellar, Nettie Palmer, and Frank Clune.

It was not until January 1938 that Paul and Hettie set out on another voyage. This time they sailed across the Pacific via Tahiti and the Panama Canal to visit the French Caribbean islands, arriving at Marseille in March. Once again they spent time on the French Riviera and made family visits; they also attended French-Australian memorial ceremonies at Villers-Bretonneux in July. Paul seems to have spent the rest of the year approaching various publishers and editors about possible publications. However, he had no success with these approaches, and at the end of March 1939 the Wenzes left France to return to Sydney. They were back at Nanima by May and in July Paul fell ill with pneumonia; he died in Forbes Hospital from complications on 23 August 1939 at the age of 70. His wife Harriet stayed on at Nanima until 1949, when she retired to Manly: she died there in 1959 and her grave is with Paul Wenz in the Forbes cemetery.