As the relationship between France and Australia and France has matured, so have the exchanges become more reciprocal. Academic exchanges and partnerships have been established; for example, the University of Adelaide’s Wine Economics Research Centre welcoming affiliates from the universities of Bordeaux and Dijon. 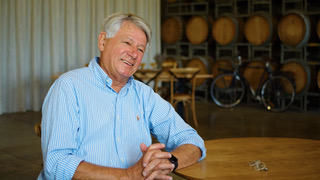 Australians have been attending and participating in Vinexpo Bordeaux since its inception. Increasingly, ‘flying winemakers’ commute between hemispheres, some choosing to remain in their adopted country. Provençale Emmanuelle Bekkers, who completed several vintages in Australia after working at Hardys’ Languedoc property, eventually settled and bought a vineyard in McLaren Vale. After a long career at Taltarni in central Victoria where he helped pioneer the new wave of sparkling wine in Australia, Bordelais Dominique Portet established his own vineyard in the Yarra Valley.

Michel Chapoutier and Jacques Lurton, both from respected French wine dynasties, have also bought vineyards in Australia and export wine to France where Australian wines are gaining greater prominence and critical acclaim. Specialist merchants such as South World Wines, established by Australian-born Gaetan Turner, represent selected Australian producers, whose wines are sold in both supermarkets and liquor chains.

And in the twenty-first century, the 1960s Australian bag-in-box innovation (Le Bag-in-Box™) now represents nearly half the wine sold in France. 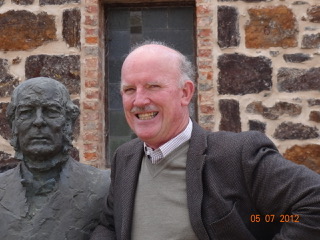 Great-great-grandson of eminent South Australian vigneron Thomas Hardy (1830-1912), Bill Hardy was the first Australian to study at the prestigious University of Bordeaux. He graduated with distinction with the Diplôme national d’œnologie, completing a vintage at the historic Château Bouscaut in the Graves district as practical experience.

On his return to Australia, Bill transferred his understanding and appreciation of French practices to Hardys winemaking, introducing the Bordeaux custom of rotating barrels at the end of the malolactic fermentation as a way of reducing oxygenation, as well as egg white fining, at that time uncommon in Australia, to produce softer, less tannic wines.

From early 1991 to the end of 1994, Bill was general manager of Domaine de la Baume vineyard in the Languedoc region of southern France. Hardys had bought the propery in run-down condition in order to produce varietally-labelled wines for the British market and promptly installed modern Australian-style winemaking facilities. whose capacity far exceeded la Baume’s modest yield. Bill’s solution was to persuade local growers, who would traditionally have made their own wine or sold grapes to the local cooperative, to change their ways, offering higher prices and prompt payment for harvests directed to la Baume.

Another innovation was the introduction of night harvesting, a practice already common in Australia. Bill gradually overcame the initial reluctance of the operators by working with them and by communicating with growers, assuring them that night-harvested grapes would make better wine than their neighbours’ traditional practices.

Bill remains active in the Australian wine industry while also serving as an international wine judge, most recently at the Vinalies Internationales wine competitions in Paris.

Born in Cognac, Louis Edouard Bourbaud was appointed viticultural adviser in South Australia in 1875, becoming the first viticultural expert in Australia at a time when vignerons keenly recognised their lack of expertise and practical know-how.

Bourbaud immediately identified a multitude of areas requiring attention. Pruning, he observed, was effectively an unknown skill and to encourage improved practices – and also reduce the risk of mildew – he proposed pruning competitions with prizes, similar to ploughing matches. His 1876 articles in the Adelaide Observer and South Australian Register, circulated in other colonies and published under the title Viticulture and Viniculture, covered such matters as soil types, siting of vineyards, selection of grape varieties, planting, vine diseases, vineyard management and pruning.

Nor was his advice limited to viticulture. He supervised the making of an experimental champagne, arguably the first made in South Australia, and advocated alternative grape products – an inexpensive jam, verjuice, wine vinegar, vermouth, brandy, ‘vin cuit’ (reduced and concentrated must), liqueurs, spirits and medicinal wines, providing recipes for quinine tonic wine, pepsin wine and sarsaparilla. In addition, he was instrumental in the establishment in 1883 of Roseworthy Model Farm and Agricultural College, the first such institution in Australia, and supported Adelaide’s newly established Museum of Economic Botany. In 1879 he launched the Franco-Australian Alimentary Company, making French-style preserved canned meat products such as pâté de Paris, galantine de Paris and boeuf à la mode, all of which were very favourably received.

The motto ‘Work, hope and perseverance’ that Bourbaud proposed for his adopted country could equally describe his own approach to life. On his death in 1883 he was described as a man of genial manners and a cultivated mind, ‘probably the cleverest expert in blending and treating wines that the colony has possessed’. 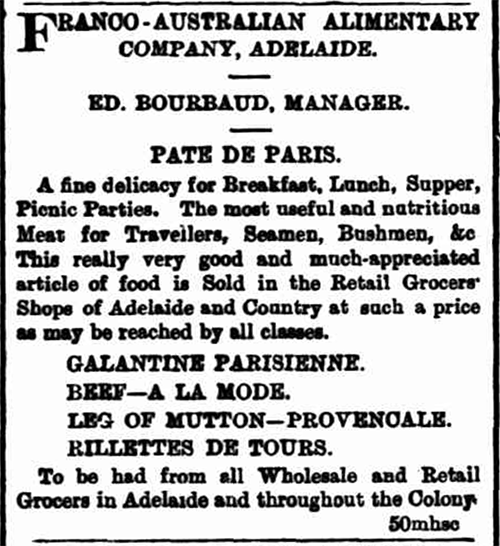 William Macarthur was arguably the most assiduous of the Australian pioneer vignerons in his attempts to encourage viticulture in this new British possession. Not only was he instrumental in fostering a wine industry in New South Wales, he also supplied grape cuttings to other colonies and encouraged emigration from Switzerland to establish new vineyards in Victoria.

After schooling in England, in 1815-1816 William travelled to Europe with his father and brother, visiting vineyards in Switzerland and France and collecting vine cuttings, only a few of which survived to reach Australia. On his return he planted a commercial-scale vineyard on the banks of the Nepean river, making his first wine in 1824. Dissatisfied with the initial site, he selected a terraced hillside further from the river for his second vineyard in 1830.

Macarthur’s close attention and careful observations informed his writings on viticulture, first published in the Australian in 1842-43 and collectively as a pamphlet, Letters on the Culture of the Vine, in 1844. His nom-de-plume of ‘Maro’ honoured the Roman poet Vergil whose work, Georgics, included details of vineyard management and winemaking. His book combined the wisdom of earlier authors, principally French, with Macarthur’s observations in France and his own practical trial-and-error experiences. As founding president of the New South Wales Vineyard Association, Macarthur continually sought to advance viticulture and promote Australian wines, the best of which he believed ‘not inferior to that of the Continental productions, even of Ihe more admired and costly kinds’.

At the 1855 Paris Exhibition, where he was a commissioner for New South Wales, Macarthur’s wines were among those selected for the Emperor’s table at the closing ceremony. At its close, Macarthur was honoured with the award of chevalier of the Légion d’Honneur by France and a knighthood by Britain, and with a public banquet on his return to Australia. 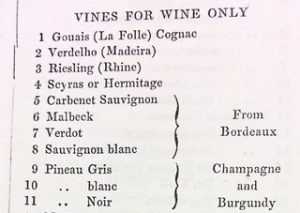 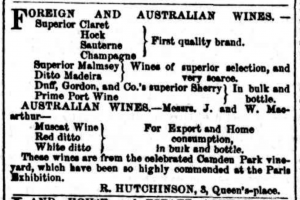