Message from the president

In this Spring edition of the newsletter, we report on several recent activities which ISFAR has been involved in: the Bastille Day French Festival in Melbourne, the Melbourne Salon, and the first of our ISFAR seminars in the series ‘After the Elections, is a Reset in French-Australian Relations Possible?’ (The answer is yes: see news of a planned visit to Australia by President Emmanuel Macron in November.)

This newsletter also details the contents of the current issue of The French Australian Review (72), which includes a tribute to former President and co-founder of ISFAR, Professor Colin Nettelbeck, and a selection of papers presented at the 35th anniversary ISFAR symposium held in 2021 in his honour. As well as planning ISFAR’s next symposium in April 2023 (see below for the call for papers), the Co-Chairs of the Research Committee have also been busy creating an ISFAR connection with Prime Minister Anthony Albanese and winning a prestigious Australian History Award. Read on to find out more!

We would also like to congratulate Honorary French General Consul in Melbourne, Madame Myriam Boisbouvier-Wylie, on being awarded the highest and most prestigious French government award, Officier de la Légion d’Honneur. See this Blue Blanc Rouge news item for details. I am sure I speak for all French Associations in Melbourne when I say that this is a very apt recognition of Myriam’s tireless and outstanding work in the French speaking community, for which we are eternally grateful.

We recommend the following exhibitions if you have not yet had a chance to visit them: The Picasso Century exhibition at the National Gallery of Victoria; and Van Gogh at The Lume. Following Van Gogh, The Lume will host Monet & Friends Alive, which promises to be equally spectacular. We end this edition with links to some articles of interest.

Until next time, enjoy the warmer weather!

Thanks to Robyn Stern and Graham Neilson for the coordination and layout of this newsletter and to all the contributors. Please send any feedback or suggestions for future topics or items for inclusion to .

The 2023 ISFAR Symposium will be held on Thursday 13 and Friday 14 April, with a possible extra day on Saturday. While the majority of the sessions will be online, we are keeping open the possibility of a hybrid keynote session to be held in Melbourne in conjunction with a conference dinner. Certain sessions will be timetabled to ensure that colleagues overseas can participate.

The theme of the Symposium, ‘New Perspectives in French-Australian Studies’, is intended to capture new fields of research, innovative theoretical and methodological approaches and the rapidly changing geopolitical landscape, but papers on all aspects of French-Australian relations are welcome. We encourage contributions from the wide range of disciplines within which these relations can be addressed. Subject to the usual review process, articles arising from the Symposium may be published in the French Australian Review.

The inaugural Colin Nettelbeck Award ($400), to finance travel for research or conference attendance, will be awarded to an Honours or Postgraduate student whose paper is accepted for the Symposium. Candidates for the award should send, together with their abstract and CV, a brief explanation of the purpose to which the funds will be put and details of any institutional support they may receive for that project. The award will be determined according to the quality of the abstract, the relevance of the paper to the themes of the Symposium and the amount of financial support already available to the candidate. The Research Committee’s decision, including the decision whether to make an award, will be final. The award will be announced by mid-March 2023.

The editors are pleased to announce the publication of The French Australian Review, number 72, Australian Winter, 2022. This is an ISFAR Conference issue dedicated to Emeritus Professor Colin Nettelbeck, co-founder of ISFAR.

ISFAR@35: Australia and France in a Regional Global Context: Past Engagements and Future Research Directions by Alexis Bergantz and Elizabeth Rechniewski is available free of charge.

Please read the whole journal to keep up to date with ISFAR’s projects and activities and to discover the latest books with connections to French-Australian relations. Please contact for further information.

ISFAR series: ‘After the Elections, is a Reset in French Australian Relations Possible?’

The next seminar in the ISFAR series: ‘After the Elections, is a Reset in French Australian Relations Possible?’ will be on Europe and the Indo-Pacific
The EU ‘Steps Up’ in the Indo-Pacific

France and Germany have been prime movers in encouraging the EU to develop its policies and presence in the Indo-Pacific, an enhanced focus leading notably to the ‘Joint Communication on EU Strategy for Cooperation in the Indo-Pacific’ issued by the EU Commission and High Representative on 16 September 2021. In the same month, Gabriele Visentin was appointed the EU special envoy to the Indo-Pacific. The significance of these moves, that signal a marked ‘Stepping Up’ in EU commitment to the region in many fields—economic, development, security—will be explored in this presentation.

The speaker is Professor Bruce Wilson, Director of the European Union Centre of Excellence at RMIT and the author of many works on EU and Australian regional policy.
To register, click here.

We are delighted to announce that on 2 September 2022 Alexis Bergantz, Co-Chair of the ISFAR Research Committee, won the Australian History Prize (worth $15,000) at the NSW Premier’s History Awards for his book French Connection: Australia’s cosmopolitan ambitions (published by NewSouth Books in 2021).

The NSW Premier’s History Awards were first presented in 1997 to honour distinguished achievement in history and are judged by an independent committee of academics, historians and other sector professionals who have been appointed by the Premier or the Minister for the Arts or their delegates.

According to the judges, ‘This book provides fascinating insights into the development and evolution of Australianness, and breathes new life into our understanding of the multicultural nature of settler Australia. It is a significant achievement for an early career researcher, and a worthy recipient of the NSW Premier’s History Prize for Australian History.’

Winning this award is a wonderful achievement! We heartily congratulate Alexis and look forward to hearing him speak about the book at the next Melbourne Salon on 20 October 2022.

Alexis’ award presentation at the ceremony on 2 September by NSW Minister for the Arts Ben Franklin. Credit: Elizabeth Rechniewski

ISFAR was pleased to be involved again this year with the Melbourne Bastille Day French Festival (see below). The festival was held at Federation Square on Saturday 16 and Sunday 17 July, with some online events held on the preceding days. Held in person for the first time since 2019, the Bastille Day French Festival was very successful. Attendees enjoyed French food, wine, music and entertainment. The French winter market provided the opportunity to purchase French goods, and the ever-popular Lumières series of talks covered themes of art, history and science. The enthusiasm to get together and celebrate all things French was clearly in evidence, and approximately 14,000 people attended. ISFAR’s participation this year was via an online trivia quiz, with some great prizes on offer.

We had several winners:

All the winners also received a free 12-month membership of ISFAR, including two issues of The French Australian Review. Congratulations to all our winners and huge thanks to our sponsors, France at Home and Cacao.

For those of you who would like to try your hand at the quiz, the questions are reproduced below. (Hint: the answer to many of the questions can be found via the search function on the French-Australian Dictionary of Biography or elsewhere on our ISFAR website.  A few may require you to cast a wider net…)

Who was the author of the novel published in French as Splendeurs et fureurs?

Approximately what percentage of wine in France is sold in the ‘bag-in-a-box’, an Australian invention?

The fictional town of ‘Paris’ featured in a 1974 Australian film. In which state is located the town where ‘Paris’ was filmed?

Who wrote the novel on which the film that opened the 2022 French Film Festival was based?

What was the sport played by the first French sports team in history to tour Australasia?

Who was the first French explorer to set foot in Australia?

Which French cultural practitioner, influential in Australia, summed up their approach to their art as ‘tout bouge’?

Who was the founding president of the Sydney French Club?

Answers will be provided in the next issue of the newsletter (and apologies, there will be no prizes!).

Nicolas Baudin’s Voyage to Australia and the Pursuit of Science 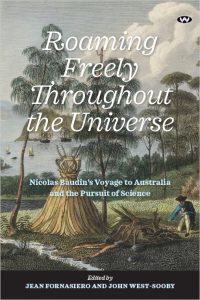 Our first in-person Melbourne Salon for 2022 was held on 25 August in Melbourne. Attendees were treated to a fascinating talk by Professor John West-Sooby, co-editor with Professor Jean Fornasiero of ‘Roaming Freely Throughout the Universe’: Nicolas Baudin’s Voyage to Australia and the Pursuit of Science (2021). John vividly brought to life Nicolas Baudin’s voyage of discovery to the “Southern Lands” (1800–1804), approved and sponsored by Napoleon Bonaparte, and rich in scientific achievements.

John’s presentation showcased the voyage’s extensive natural history collections and ground breaking anthropological work, wonderfully humanising the scientists and demonstrating how the Baudin expedition exemplified the debate in France at the time regarding the role and nature of the scientific voyager.

This was John’s second Melbourne Salon. His first was in October 2012, where an earlier book of John’s (Discovery and Empire: French Ships in the South Seas, University of Adelaide Press) and the Baudin Legacy website were launched. Details of this Salon can be found here.

John has promised to return to talk to us about his next book when it is finished: an edited volume of essays on French contributions to Australian cultural life entitled What have the French ever done for us? We look forward to welcoming him back for a third Salon!

For anyone who missed out, ‘Roaming Freely Throughout the Universe’: Nicolas Baudin’s Voyage to Australia and the Pursuit of Science can be purchased online here.

The next Melbourne Salon (in-person) will be on 20 October 2022. Co-Chair of the ISFAR Research Committee, Dr Alexis Bergantz will be talking about his book French Connection: Australia’s cosmopolitan ambitions (2021) – which has just been awarded the NSW Premier’s History Awards 2022, Australian History Prize (see above). Hold the date!

When Prime Minister Albanese was in France in early July to meet President Macron and ‘reset’ French-Australian relations, he visited the Fondation Cartier to open the first major solo survey exhibition outside Australia of the art of Sally Gabori. While there, he was given a copy of ‘Australia and Beyond’, the first issue of Postcolonial Cultures, Studies and Essays (formerly Cultures of the Commonwealth) edited by Deidre Gilfedder (Université Paris Dauphine), ISFAR member and coordinator of the French-Australia network in France. The journal includes an article by ISFAR Research Committee Co-Chair Elizabeth Rechniewski, ‘The Politics of Boer War Commemoration in Australia.’ We hope Prime Minister Albanese read the issue on the long flight home!

Cover image of Postcolonial Cultures, Studies and Essays ‘Australia and beyond’, Agregation d’anglais, No 1 Spring 2022

This article by Virginie Martin and Neville Dyer, published in The Conversation on Tue 19 Jul 2022, explores the complexities of French President Macron’s character and approach to politics, against the backdrop of a decline in his popularity and parliamentary majority since his rise to power in 2017.
Who is Emmanuel Macron? Cracking the riddle of France’s divisive president

RMIT University has been chosen to lead a $22.8 million Australia-France doctoral training network – The Australia France Network of Doctoral Excellence (AUFRANDE). Co-funded by the European Commission, along with RMIT and other partners, the five-year project will involve 64 early career doctoral researchers and focus on generating industry-relevant research. The network was launched at the Australian Embassy in Paris on Wed 10 Aug.
RMIT University to lead €15.7 million Australia-France doctoral training network

This article in the ABC News, published on Fri 16 Sep 2022, discusses the submarines one year since the AUKUS announcement.
A year since AUKUS and there is no clear plan for nuclear submarines, ABC News.