The 2023 ISFAR Symposium will be held on Thursday 13 and Friday 14 April, with a possible extra day on Saturday. While the majority of the sessions will be online, we are keeping open the possibility of a hybrid keynote session to be held in Melbourne in conjunction with a conference dinner. Certain sessions will be timetabled to ensure that colleagues overseas can participate.

The theme of the Symposium, ‘New Perspectives in French-Australian Studies’, is intended to capture new fields of research, innovative theoretical and methodological approaches and the rapidly changing geopolitical landscape, but papers on all aspects of French-Australian relations are welcome. We encourage contributions from the wide range of disciplines within which these relations can be addressed. Subject to the usual review process, articles arising from the Symposium may be published in the French Australian Review.

The inaugural Colin Nettelbeck Award ($400), to finance travel for research or conference attendance, will be awarded to an Honours or Postgraduate student whose paper is accepted for the Symposium. Candidates for the award should send, together with their abstract and cv, a brief explanation of the purpose to which the funds will be put and details of any institutional support they may receive for that project. Criteria for the award include the quality of the abstract, the relevance of the paper to the themes of the Symposium and the degree of financial support already available to the candidate. The Research Committee’s decision, including the decision whether to make an award, will be final. The award will be announced by mid March 2023.

Australia and France in a Regional and Global Context: Past Engagements and Future Research Directions

The 35th anniversary symposium held in April 2021 in honour of Professor Colin Nettelbeck was opened by French Ambassador S. E. Jean-Pierre Thébault, while Honorary Consul-General in Melbourne, Mme Myriam Boisbouvier-Wylie closed proceedings. This provided the opportunity both to welcome the Ambassador and to hear of his priorities and to thank Mme Boisbouvier-Wylie for her strong support of ISFAR’s activities. Although the Symposium was held online, it was an inclusive and collegial event, attracting attendances of between twenty-five and forty-five for the various sessions. The papers covered a broad range of political, cultural and historical topics, from the early history of French-Australian relations to the contemporary diplomatic rapprochement in the Pacific in the context of an encroaching China; photography and viniculture; student educational tours and language enrichment; and aspects of the history of World Wars One and Two in Europe and the Pacific.

The Symposium afforded the occasion to pay tribute to Professor Colin Nettelbeck, one of the founders of ISFAR, and to announce a Scholarship in his honour that will finance the attendance of Postgraduate and Honours students at future ISFAR conferences. The keynote presentation by Professor Robert Aldrich, ‘From the French East Indies Company to the French in the “Indo-Pacific”’, provided a clear and comprehensive overview of four centuries of French presence in the Indo-Pacific region. An adapted version of Professor Aldrich’s keynote was published in The French-Australian Review 70. 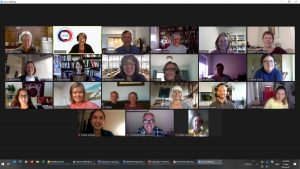 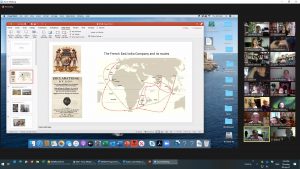 The 2nd ISFAR colloquium was held on 27th September 2018 at the University of Adelaide, with the theme of “French Contributions to Australian Life”. Thank you to all delegates, who presented a rich array of papers including a very interesting round table discussion on the topic of “Reflections on the Commemorations of the Great War”.

The colloquium culminated in a keynote address by Emeritus Professor Colin Nettelbeck (Past President of ISFAR) entitled “France and the French in Australia’s growth to nationhood: 1914-1945”, as part of the centenary celebrations of French Studies at the University of Adelaide. The title and abstract of Prof. Nettelbeck’s address were as follows:

France and the French in Australia’s growth to nationhood: 1914-1945
In the more than 200 years of relations between France and Australia, the ambiguities and complexities of the period that spans the two world wars of the 20th century are of special interest. This lecture will argue that the specific role of France and the French in Australia’s growth to nationhood deserves much closer attention than it has received to date. It will show how, from the military alliance of World War I to the appointment of Australia’s first ambassador to France in 1945, the tension between attempts to forge closer bonds, on the one hand, and frequently resurgent distrust and conflict, on the other hand, were crucial to Australia’s self-image and self-positioning as an emerging nation in a dramatically unstable geo-political world.

Thank you to those who participated in the ISFAR Colloquium on 2 November 2017.

Thank you to those who participated in the ISFAR Colloquium on 6 December 2016. Some photographs from the day are here.