The 2022 Ivan Barko Award is awarded to Dr Patricia Clarke OAM for ‘Australian Connections with the Franco-Prussian War 1870 and the Commune of Paris 1871’ published in The French Australian Review, number 71, (Summer 2021–2022).

The article recounts how two women journalists with long associations with the Australian press were on the spot in Paris to report on two events of great historical importance – the Franco-Prussian War of 1870 and the French Commune of 1871. Clarke uses the stories of these two women to explore the position of women journalists at the time, to provide insights into the lives of these two women, and also into the interest that the Australian public had in events in France and more broadly in Europe.

The NSW Premier’s History Awards were first presented in 1997 to honour distinguished achievement in history by Australian citizens and permanent residents. The awards celebrate the contribution of historical research to our culture and communities, and to humanity at large. They encourage everyone to appreciate and learn from the efforts of our historians.
The NSW Premier’s History Awards are administered by the State Library of NSW in association with Create NSW and with support from the History Council of NSW.

Judges’ comments:
French Connection reveals the remarkable and indelible presence of French people and French culture in Australian history. Drawing from a wide array of sources — government records, newspapers, private diaries and more — Bergantz shows how Frenchness was simultaneously a source of fascination, inspiration and derision for Australians in the process of defining their nation and national character at the turn of the twentieth century.
We learn how Frenchness, with its supposed sensuality, femininity and sophistication, was understood as diametrically opposite to staid, pragmatic, masculine Britishness. Some Australians were, moreover, anxious about the establishment of a French penitentiary in the Pacific. The presence of liberated or escaped French convicts from New Caledonia brought back shameful reminders of Australia’s own penal origins. Bergantz deftly guides the reader through this sweeping analysis.
This book provides fascinating insights into the development and evolution of Australianness, and breathes new life into our understanding of the multicultural nature of settler Australia. It is a significant achievement for an early career researcher, and a worthy recipient of the NSW Premier’s History Prize for Australian History.

On 12 May 2022, Professor Véronique Duché (Vice President, ISFAR) and Dr Jane Gilmour (Co-Editor, French Australian Review) were decorated with the highly prestigious Ordre national du mérite in a ceremony at University House, University of Melbourne.
His Excellency, Mr Jean-Pierre Thébault, Ambassador of France to Australia, presented Véronique and Jane with their medals, along with a third recipient, Marie Wilkening-le Brun. Both Mr Thébault and Ms Myriam Boisbouvier-Wylie, French Honorary Consul General in Melbourne, gave warm and congratulatory speeches to all recipients. The French Consul- General in Sydney, Ms Anne Boillon, concluded the ceremony with her own words of congratulations.
This award recognises how much both Professor Duché and Dr Gilmour have done for French studies, French relations, and French language and culture in general in Australia, including (but not limited to) their invaluable roles with ISFAR. Congratulations Véronique and Jane! 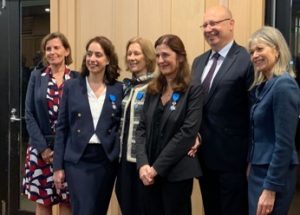 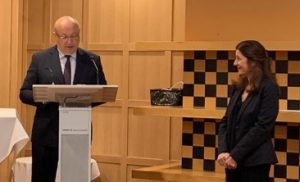 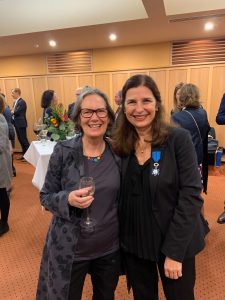 Andrew’s research for this article focused on Berthe Mouchette’s impact on women, in particular, during the twelve years of her life spent in Melbourne. She was a professional artist and teacher who fostered an appreciation of women’s art through her own example and her student exhibitions. In so doing she expanded the public sphere in which women could operate in the evolving society of Melbourne towards the end of the nineteenth century.

Dr Andrew Montana is a senior lecturer at the Australian National University and researches in the areas of visual arts, architecture, design and the decorative arts. A PhD graduate of Melbourne University, he is the author of many articles on art and design and has written several books including Fantasy Modern: Loudon Sainthill’s Theatre of Art and Life, (NewSouth Publishing, 2013) and The Art Movement in Australia: design, taste and society 1875–1900 (Miegunyah Press, 2000).