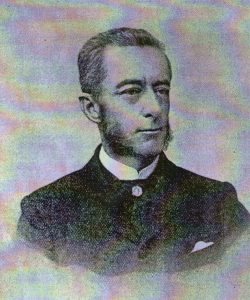 Georges Biard d’Aunet, naval officer, diplomat and the first French Consul-General in Sydney (1893–1900) and then the first consular representative of France to the whole of Australia (1900–1905), was born on 24 August 1844 in Paris. He was the second child of François Thérèse Biard (self-styled Auguste François) and Léonie d’Aunet. Biard (1799–1882) was a painter of historical and maritime scenes at the court of Louis-Philippe. The date of birth and the identity of the father of Léonie Denise Marie Thévenot d’Aunet (1820?–1879) are both uncertain, and her entitlement to the aristocratic surname d’Aunet is equally dubious. Léonie and the artist married in 1840 when Léonie was pregnant with Marie Henriette, the future Madame Peyronny (later styled ‘de Peyronny’ or ‘la baronne Double’) who became a fashionable Paris hostess as well as a celebrity feature writer with Le Figaro under the pen-name of Étincelle.

Léonie had a reputation for being an unconventional and daring young woman with literary ambitions. She left her husband in the spring of 1844, shortly before giving birth to Georges. A little over ten months later, on 4 July 1845, Biard, accompanied by a police inspector, surprised Léonie in flagrante delicto with the poet Victor Hugo, recently elevated to the rank of Peer of the Kingdom. The scandal was hushed up and Hugo was spared by the police but Léonie spent two months and three weeks at the Saint-Lazare prison for women. The legal separation of the Biards was finalised in January 1846, and Léonie’s access to her children was severely restricted.

In 1861 Georges was admitted to the École navale from where he graduated two years later. For over a decade his progression in the Navy was exemplary but after his promotion to Lieutenant de vaisseau in 1873 he began to show signs of restlessness. In 1986 he went on leave without pay to organise an ambitious and highly innovative educational cruise around the world as captain of the liner Junon. The cruise however had to be cancelled halfway, due to flaws in the financial planning—which was not his responsibility—and this failure prompted him to withdraw from the private sector.

In 1879, at the age of 35, Georges decided to start a new life. Within a few months he resigned from the Navy, changed his name, entered the consular service and got married. These initiatives were carefully coordinated and harmonised. After his mother’s death he added her surname (d’Aunet) to his father’s (Biard) and married Marie Louise Annunziata Joséphine, the daughter of the Marquis and Marquise de Lestang Parade, an old family with roots in Aix-en-Provence. Four sons were born to the Biard d’Aunets. From 1879 to 1892 he served as Vice-Consul and then Consul at Algeciras, Aden, Bizerta, Swansea, St Petersburg and Alexandria, with, after St Petersburg, a two-year period at the Commercial Desk of the Quai d’Orsay.  Until his posting to Alexandria, Biard d’Aunet progressed well in his consular career: he was promoted and decorated at regular intervals. In Alexandria however he found himself at loggerheads with his superior, the Marquis de Reverseaux, head of the French diplomatic representation in Egypt, who thought he had an ‘execrable character’ and requested his recall. The Quai d’Orsay’s solution to this quandary was to promote him to the most remote posting available, the Consulate in Sydney, which on this occasion was upgraded to Consulate-General.

During the eighteen-nineties Biard d’Aunet enjoyed the confidence and the support of the Sydney French community and established useful contacts in the local establishment. More specifically he became friends with free trade champion Sir George Reid, Premier of NSW and later, for a short time, Prime Minister of Australia. Biard d’Aunet consolidated the infrastructure of the Sydney French colony by supporting and strengthening the institutions created under his predecessor, Consul Léon-Henry Verleye, the French Benevolent Society (1891) and the weekly newspaper Le Courrier australien (1892) and establishing the Sydney Alliance Française (in two stages, 1896 and 1899). He also contributed to the foundation of the French Chamber of Commerce (1899). The Consul-General provided the local French community with strong leadership and a sense of belonging, physically gathering all the French institutions around the Consulate-General in the Bond Street Chambers (2 Bond Street).

The Biard d’Aunets chose to live in Hunters Hill, the ‘French village’. The family, however, disintegrated quickly. Two of the boys were sent back to France for their education and Mme Biard d’Aunet returned to France with the youngest in 1895. The separation became permanent. In the late eighteen-nineties a close friendship developed between the lonely Consul-General and Lady Innes, the widow of Sir Joseph George Long Innes, a former Attorney General and former Judge of the Supreme Court of NSW, and the mother of six children.

The Consul-General’s 1898 report to his government on Australia’s move towards Federation had been well received by the Quai d’Orsay and, while little action was taken on his bolder and more resource-hungry policy recommendations, his proposal to centralise French representation in Sydney found favour with Théophile Delcassé, the Minister for Foreign Affairs. In 1899 Biard d’Aunet took extended leave to negotiate the details of the reorganisation of French consular services after the proclamation of Federation. From November 1900 the Melbourne Consulate-General was downgraded to Vice-Consulate, and the jurisdiction of Georges Biard d’Aunet was extended to the whole of the new Commonwealth of Australia.

His return to Sydney in November 1900 should have been a triumphal one but when Louis Vossion, his temporary replacement, re-opened the question of his unauthorised change of name from Biard to Biard d’Aunet, his career took a downward slope. Delcassé ordered him to revert to plain ‘Biard’ but as a matter of pride and self-respect the Consul-General resolved to ignore this humiliating ruling and continued to sign all documents, official and unofficial, as Georges Biard d’Aunet. There is ample evidence in his file at the Quai d’Orsay that his obstinacy in this matter precipitated his fall from favour and it eventually led to his retirement at the comparatively early age of sixty. This second (and shorter) half of his term in Sydney was marred first by a feud, both personal and political, with the young and accident-prone Governor of NSW, Lord Beauchamp, and later by bitter disagreements with members of the consular corps in Victoria and the staff of the French Vice-Consulate in Melbourne. In contrast to his early years in Sydney, there is no record of any memorable achievements to his credit during this period.

In 1906, a year after his return to France, he divorced Annunziata and married Lady Innes née Emily Smith. In retirement he contributed a series of articles on Australia to the Revue des Deux Mondes (1906), subsequently published in book form under the title L’Aurore australe (1907). He saw his role as one of a cultural mediator between the two countries. He wrote about Australia as a friend and a constructive critic, a sympathetic outsider with a long and thorough familiarity with the place and its inhabitants.

His second marriage lasted nine years, until 1915.He married for the third time the following year. Georges Biard d’Aunet died at the age of eighty-nine at Hyères, on the Côte d’Azur, on 12 April 1934.

Biard d’Aunet was appointed Chevalier de la Légion d’honneur in 1886 and in 1905 was  promoted to the grade of Officier.