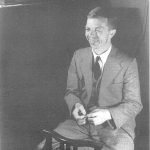 Ian Allan Henning was born in the Sydney suburb of Waverley on 14 June 1905, the first of three sons born to Henry Herbert and Amy Ethel Henning. Having given up his job repairing automobile magnetos, Henry Henning spent the rest of his life as an inventor, none of whose inventions ever sold. A ‘domestic tyrant’, as one family member would later describe him, he would rely on his eldest son Ian to become the family breadwinner once he reached adulthood. It seems probable, given his lack of social skills in particular, that he suffered from a form of what would today be diagnosed as Asperger’s Syndrome.

At the age of five Ian Henning became a pupil at Bondi Superior Public School, but his parents’ move in 1917 from Waverley to the North Shore suburb of Pymble meant a change of schools, and he completed his primary school education at Chatswood Primary School. Here, his results were good enough to earn him a bursary and to gain him entry to Sydney Boys’ High School, where he sat for the Leaving Certificate in 1922, the brightest language student of his year. Awarded the Lithgow Scholarship No. 1 for proficiency in French and German, he enrolled in 1923 in the Faculty of Arts at the University of Sydney.

Majoring in French and German, Henning had among his teachers some remarkable figures. First, there was the McCaughey Professor of French, George Gibb Nicholson, to whom the epithets ‘formidable’ and ‘redoubtable’ had already attached themselves owing to his practice of failing large numbers (sometimes the majority) of students undertaking the French course. Among the small staff of the Department of French was the equally rigorous but much more endearing Gladys H. Marks, a pioneer of what today would be called feminism and the first woman to hold the title of Professor (albeit in an acting capacity) at the University of Sydney; she was later to be the subject of an entry in the Australian Dictionary of Biography. One of his lecturers in German—a subject which at this time ranked equally with French as his preferred area of study—was also to become the subject of an ADB entry, namely the scholar and poet Christopher Brennan, whose influence on Henning was so strong that he named his second son, Christopher John, after him.

Awarded a French Government Scholarship, Henning left for Paris on R.M.S. Osterley in August 1926, his shipboard companions remained close friends during his years of postgraduate study and, in the case of John Cawte Beaglehole, over the years that followed. Beaglehole became Professor of History at Victoria University in Wellington, New Zealand; he was a remarkable polymath and was awarded the CMG, multiple honorary degrees and the Order of Merit—the first New Zealander since Ernest Rutherford to be so honoured.

At the Sorbonne, Henning completed a doctoral thesis on Mme de Staël’s seminal work De L’Allemagne, his supervisor being the comparatist Fernand Baldensperger. Having been awarded the Doctorat de l’Université de Paris with a mention très honorable, he was appointed in 1929 to a one-year acting lectureship in Nicholson’s department at the University of Sydney. Needing to find another position once this short-term post terminated, he was persuaded by his friend Beaglehole to take up a lectureship at what was then known as Victoria University College in Wellington. He found this experience so unpleasant that he quit after only two years, and thereafter occupied a number of short-term lectureships in Nicholson’s department until he was at last promoted in 1944 to a tenured senior lectureship.

In December 1945, he was offered appointment to the McCaughey Chair of French following Nicholson’s retirement, and took up the position in January the following year. On 8 November 1946, he married Patricia Anne (Pat) Massie, who had been a student in his classes and whom he had appointed as departmental Secretary at the beginning of that year. Despite the considerable difference in their ages (he was 41 at the time of their marriage, she 20 years younger), theirs was a very happy marriage. They had two children, Robert (born in 1949) and Christopher (born in 1954).

Henning retired in December 1970, having overseen an impressive expansion in both student and staff numbers in his department. He died on 6 October 1975.

Insofar as he is remembered at all by former students and colleagues, Ian Henning is often thought of as a conservative scholar of the old school, somewhat reserved if affable, and fiercely resistant to new ideas or trends in the discipline of French Studies. This view is to some extent understandable, given that almost all those who remember him today knew him only during the years of his professoriate.

Yet, if a life is the sum of its parts, the very different person that was the young Ian Henning should not be overlooked. This was a young man who very consciously saw himself as a public intellectual—indeed, one who had been writing articles for the weekly magazine The Bulletin since he was a schoolboy. In a career which included several periods of at best precarious employment, Henning was from time to time able to eke out a living by paid contributions to The Bulletin and The Sydney Morning Herald, in which he would express at times controversial views on the issues of the day, including the role of foreign language learning in building a civilised society.

Advancing years, marked significantly by the burden of caring for an at times dysfunctional family, brought about a gradual withdrawal from public engagement, so much so that, by the time of his retirement, his social interaction was restricted almost entirely to his family and a tiny circle of friends. The man who, on taking up his professorial Chair, had insisted that all members of his department address him in French, eventually would speak to his staff, including native French speakers, only in English and would write in English any letters that needed to be sent to the French Embassy in Canberra.

It was frequently noted by colleagues that, having spent three years as a doctoral student in Paris, he never returned to France despite the generous sabbatical leave provisions of his day. Partly, but not entirely, a result of his reluctance to be separated from his deeply enmeshed family, it was also a matter of a refusal to toe the academic line, an increasingly disabused attitude towards what he saw as academic gamesmanship, including the ‘publish or perish’ syndrome. His sole publication was his doctoral thesis, its publication having been a requirement of the Sorbonne.

Yet, even in his later years as a professor, he remained adamant as to the benefit of foreign language learning in the understanding of one’s own society. Though he always retained his interest in French literature—at least, of literature from before 1950—it was translation (both French into English and English into French) that represented for him the best means of entrée into other societies and their way of thinking.

Translation for him was not, as it had been for his predecessor G. G. Nicholson, a mental discipline consisting of what was curiously known as ‘exact translation’, an exercise in precision of thought and consequently correctness in expression, but rather an exercise in understanding, highlighting through the consideration of various possible translations the very difficulty—at times, the impossibility—of expressing ‘exactly’ in one language what has been written in another. The search for the nearest English equivalent of a French word or phrase was an exercise in understanding precisely what the author had in mind, the particular nuance that he or she was attempting to convey. Whilst he considered the end product of university language teaching to be the enthusiastic understanding of great literature, he believed that such understanding could be based only on mastery of the nuances of the language itself.

For those students who grasped his intention—not always an easy outcome of his teaching given an emphasis on the correct physical presentation of written work which did indeed align him with Nicholson’s obsessive demands in this area—his translation classes opened up an appreciation, not only of French literature, but of French attitudes and values much more authentically than the at times superficial ‘civilisation’ courses for which he often expressed his distaste.

It was typical of his approach, and of his achievement in inspiring his best students with a love of France and things French that, when his colleagues wished to mark his retirement, whilst he was horrified at the prospect of a Festschrift being produced in his honour, he expressed his pleasure at the suggestion of his friend and former colleague Keith Goesch that a function be held to which his former students would be invited—a celebration geared especially to his teaching over the previous forty years.

As he firmly refused to publish, Ian Henning’s influence on posterity is not to be found in the written word. That he inspired several generations of students to develop an abiding love of French language, literature and culture, a number of them becoming themselves professors of the discipline, is perhaps the greatest contribution he made to the building up of understanding between France and Australia.