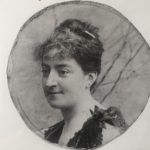 Marie Anne Julie Lion, artist, novelist and educator, was born on 2 May 1855 in the town of Marseillan in the Départment of Hérault in the south of France. She was the daughter of Louis Jean-Marie Lion, a contractor with the railways department, and Anne Deguilhem Pemilat.

Marie Lion had diplomas from the French University academies of Paris and Bordeaux and, by 1881, was living in Paris. In that year, with her sister Mme Berthe Mouchette and her brother-in-law M. Nicholas Mouchette, she decided to travel to Australia, arriving in Melbourne on 2 September 1881.

Mlle Lion worked with Mme Mouchette at her studio at 5 Collins Street East. She was skilled as a linguist, and excelled in miniature painting. In March 1882, she exhibited at the Victorian Academy of Arts. Their studio was later relocated to 77 Collins Street West but, after the death of Nicolas Mouchette in 1884, Berthe Mouchette purchased ‘Oberwyl’ school for young ladies in Burnett Street St Kilda where Marie Lion joined her as a teacher. It was at ‘Oberwyl’ that the first meeting of the Alliance Française in Australia was held on 6 June 1890, and where Marie Lion taught the first French language courses for the Alliance Française in this country.

The highly fashionable girls’ school prospered for some years until the deep economic depression of the 1890s hit Australia. With declining enrolments, Berthe was forced to sell ‘Oberwyl’ in 1892, and an auction was held in mid-1892 of its furnishings and other contents. Soon after, in July 1892, Mlle Lion moved to Adelaide with her sister. They resided at Aldgate, a town in the Adelaide Hills, where they gave painting and drawing lessons to the prominent Stirling family. They became members of the Theosophical Society in Adelaide on 9 July 1895.

In 1900, Marie Lion travelled to India with her sister and explored the country from south to north. Before travelling to Bombay in 1903, they attended a grand session of the Theosophical Society at the headquarters in Benares where they befriended Mrs Annie Besant who was active in the Theosophical movement.. They returned to Adelaide at the beginning of 1906 and resumed classes in Strathalbyn. By 1908, while maintaining a studio in the Adelaide Steamship Buildings, they were living in Mylor where they established a comfortable home in idyllic rural surroundings as part of the South Australian ‘blockers’ land purchase scheme.

In 1910  Marie Lion wrote and published her first novel Vers la lumière under the pseudonym ‘Noël Aimir’, an anagram of her name. This was translated by her friend, the artist Maude Wholohan, and published in 1911 as The Black Pearl, the only one of her three novels to have been translated into English. A semi-autobiographical work, it largely described her own experiences while staying with the eminent Stirling family of Strathalbyn.

Marie Lion’s next book, again using her nom-de-plume, was published in 1911. Titled La Devadasi, it was the first novel published in French in Australia. By this time, she had been teaching French in South Australia for nearly twenty years and, with her sister, had some influence in the establishment of the Alliance Française in Adelaide on 7 July 1910. Reflecting the author’s visit to that country in 1900, La Devadasi was set in India and named for the community of women dedicated to the patron gods of the great temples in eastern and southern India. In 1913, Marie Lion, again as ‘Noël Aimir’, wrote her third book Les Dieux Interviennent, but it was not published until 1916 due to the war. This ‘stirring romance of the French Revolution’ allowed the author to draw on her research into this period of French history about which she had lectured extensively in Adelaide.

Following the outbreak of World War 1, Marie Lion and Berthe Mouchette travelled to Paris in 1915 to work as volunteers in hospitals caring for the wounded. Unfortunately, Marie contracted an infection while there, and they were forced to return to Adelaide in 1916. They soon opened a studio in the National Bank Chambers in King William Street, and later, resided at ‘Duncan Cottage Homes’ in Rose Park.

At the end of the war, several badly damaged French villages were ‘adopted’ under a program of support by cities in Australia. Adelaide took on Dernancourt in the Somme, which was almost annihilated during the Battle of Dernancourt in April 1918, and the two sisters were actively involved in raising funds for the rebuilding of the devastated town.

The final title published under Marie Lion’s name was Pour sauver la Reine. It was in fact a re-issue in 1922 as a small format edition in the ‘Le Livre Préféré’ series by Éditions Plon-Nourrit of Les Dieux Interviennent, which had first appeared in 1916. This popular version, in which the author was named erroneously as Marie Léon [sic], was issued posthumously, some time  before July 1922, in an edition of 20,000 copies; Marie Lion had died less than two months previously on 3 May 1922, at the age of 67.

Marie Lion was a founding member of the South Australian Cremation Society, the first such institution in Australia, which had been formed in 1900. As such, she was entitled to free cremation; a ceremony was held at the Theosophical Society in Adelaide on 4 May 1922 with the President Harold Oliphant giving the eulogy.

Marie Lion contributed enormously to the education of young women in Melbourne as a dedicated teacher of French, literature and art, activities which she extended to other groups when she lived for thirty years in South Australia.  Her lasting legacy, however, lies in the three original novels she published as Australia’s first French novelist between 1910 and 1922, which attest to her contribution to Australian literary history.