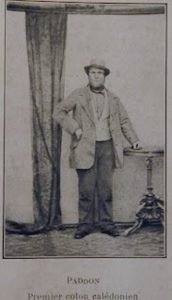 James Paddon, trader and colonial pioneer, sometimes referred to as “New Caledonia’s first colonist”, was one of the most influential figures in the European colonisation of New Caledonia and the New Hebrides. Paddon was born in Portsea, England, on September 23, 1811, to Sarah and James Paddon, one of eight children. The family had seafaring roots: his naval father was by 1819 master of the HMS Myrmidon. Inspired by the voyages of James Cook and the victories of Nelson and Collingwood in the Napoleonic Wars, Paddon joined the British navy at the age of thirteen, rising to the rank of midshipman by the time he left the navy in the mid 1830s (Martin 2010). He was described as Captain James Paddon of the George Canning free-trader in the announcement in the local Exeter paper of his marriage to Lucretia Fitzmaurice on October 27, 1834 (Exeter Flying Post 1834). His physique was short and stocky—measurements taken after his death estimated that he was only 1.67m tall—and there were references to his “rude [ie. rough] appearance” that nevertheless belied a generous heart (Moniteur de la Nouvelle-Calédonie 1866).

In the more peaceful era that followed the defeat of Napoleon, he sought an outlet for his adventurous and entrepreneurial spirit in trading ventures across the South Pacific that were to make his name and fortune. He was one of many who pursued this career but only a few were as successful as he; his contemporary and rival Robert Towns (1794–1873) was one, as was the man who began his career working for Paddon and who took over many of his activities, John Higginson (1839–1904).

Paddon’s entrepreneurial activities across the South-West Pacific drew Australia’s east coast, New Caledonia and the New Hebrides into close trading relationships that involved the exchange not only of goods but of people, fauna and flora, tools and techniques, and ideas. Paddon facilitated the colonisation of these latter territories in several ways: through his commercial interests that drew the Indigenous peoples into the wider orbit of the Pacific trade economy; by founding ports that supplied ships and settlements; by providing the French with essential supplies after their takeover of New Caledonia in 1853; and by organising the migration of colonists from Australia.

His first trading venture, in the late 1830s, was as Captain of the Brigand, probably trading opium to China on behalf of the ship’s owner, Heerjeebhoy Rustomjee: Rustomjee’s name appears on a list of “inveterate opium traders” compiled by the Chinese government in 1839 (Houghton 2020, part 9). There Paddon discovered the interest in sandalwood that was to make his fortune. In the 1820s tea, mainly supplied by China, had become an essential drink in Australia as in Britain. The principal product that China sought in exchange for this commodity was sandalwood, used for both ceremonial and profane uses (incense, fans and luxury items). After the exhaustion of wood from Fiji and other over-exploited islands, the sandalwood traders turned to the New Hebrides and New Caledonia for supplies. From 1841, and continuing over the following decade, the “scramble for sandalwood” brought scores of foreign ships to these islands that were described by the Sydney Shipping Gazette in 1851 as “of much greater importance to our Australian colonies than any others in the Pacific”.

Paddon differed from his trading rivals in establishing teams of workers who remained on the islands to bargain for, fell and prepare the wood, and transported it to the beaches to be collected by his ships. In pursuit of this policy, in January 1844 Paddon bought the uninhabited islet of Inyeuc off the south-west coast of Aneityum in the New Hebrides; since the traditional Indigenous owners believed the islet to be haunted, it cost Paddon only a few trade goods. Here he founded a well-provisioned station and, the following year, set up a base at Port St Patrick on the north coast of Aneityum. He gradually increased his fleet of ships, sought new financial backers (Thacker & Co of Sydney) after the bankruptcy of Rustomjee and took on new partners: Captains Charles Edwards, Walter Todd and Somerville are reported as associated with his ventures in the New Hebrides and New Caledonia over the following decade. In 1852 Paddon added a counter at Port Resolution on Tanna and another at Erromanga. His establishments were widely advertised in the Australian and New Zealand press as ports of call for whalers and other ships on the Pacific routes, offering safe harbours, facilities for repair and well-stocked stores. A steady and regular trade developed between the New Hebrides, Sydney and China: Paddon’s ships, the smaller vessels built at a construction site at Aneityum, carried sandalwood, bêche-de-mer and coconut oil to Sydney or more often to China and returned with merchandise of all kinds.

Paddon’s success seems to have stemmed partly from his policy of attempting to conciliate the local peoples through fair treatment, negotiation and purchase of land (Adams 1984, 41). In this he was widely reported as taking a different approach to that of his contemporaries; Shineberg (1967, 108) notes that even the Protestant missionaries, generally hostile to the sandalwood trade, conceded that Paddon had a “good name” in the business. Much was made of his fair-minded approach in the tributes paid to him at the interment of his ashes in Païta in 1866, when several speakers spoke of his humanism in this regard: “jamais il n’a cru que les différences de couleur dût établir des différences de droit” declared M. le R. P. Montrouzier, claiming to represent in these words the views of the natives themselves (Moniteur 1866). Paddon’s common law wife, Naitani, was a native of Tanna. They had four daughters—three of whom, Louise, Lizzie and Bella, survived to adulthood—who were brought up and educated in the European world and married Frenchmen. Of the fate of his lawful wife Lucretia nothing is known. Certainly no children of that marriage came forward to claim his inheritance which passed to his nephew Thomas, the son of his sister Ann.

The trade could not, however, be carried on, even by Paddon, without armed confrontation and killings on both sides. On several occasions Paddon’s ships were subject to attacks by the local people: in November 1843 an attack on the Brigand at Maré led to the death of some seventeen crewmen (Sydney Record 1843; Shineberg 1967, 99). It was reported in June 1844, by the Australian and many other papers in identical terms, that a number of Brigand’s passengers and crew had been murdered by local natives at the île des Pins on a voyage from Wellington. The ship had returned, the reports continued, “well manned and armed and had severely punished the natives and taken possession of the island.”

Whatever the exact truth of these reports that seem at times to confuse date and place of confrontation, by 1846 Paddon had established a small station on the île des Pins. He gradually moved the focus of his activities to the healthier climate of New Caledonia (he suffered from recurring bouts of fever) and during the early 1850s he set up stations at Canala, Houaïlou and elsewhere along the east and west coasts of the main island. In 1851, having obtained the consent of the local chief Kuindo, he bought the île Nou, where he established facilities for processing coconut oil, salting fish, preparing bêche-de-mer and tortoise shells, and introduced horses, cattle and other livestock from Australia. This thriving settlement, which employed some 300 Europeans and Kanak, provided vital supplies to the garrison established at Fort Constantine, opposite île Nou, after the French takeover of New Caledonia in 1853.

Speaking at Paddon’s memorial service in 1861, M. Guys of the local Chamber of Commerce declared that Paddon had rendered “to our administration, services which the Governors and Commandants who successively took office here all recognised, in the most flattering terms. He continued to supply all that was required in the way of provisions to our garrison and our shipping” (Sydney Morning Herald 1861). It was Paddon who organised the regular postal service between Noumea and Australia. By the mid 1850s he had a dozen bases on New Caledonia but he was forced to hastily leave the colony for Australia in 1857, reportedly on being accused of selling arms to the Kanak (Priday 1942, 44). The French later sought him out in Australia, however, and encouraged him to return, on condition that he organise the recruitment of settlers to their new colony. In December 1858, having sold the île Nou to the French for 40,000 francs, he was granted a concession of 4000 hectares of land at Païta for the purpose of settlement. Advertisements duly appeared in the Sydney papers offering migrants twenty hectares of land, support during the settlement period, 500 francs a year and five percent of the produce of their land; in return the settler had to stay and work the land for five years. Eighteen male colonists and their families, some of German origin but all recruited in Australia, settled there; despite the difficult first few years, most remained and integrated into the developing French colony where they became known as the “colons Paddon”.

The famous botanist Charles Moore, Director of the Royal Botanic Gardens in Sydney from 1848 to 1896, visited Paddon’s settlement on Aneityum in 1850 where he collected samples of a range of indigenous plants unknown in Europe until then (Mabberley 2002, 261). Over the following decade Paddon continued to send specimens of native plants to the Gardens, while Moore sent mango, cinnamon and other fruits and spices to Paddon, who experimented with establishing them on New Caledonia and adjoining islands. Paddon’s interest in the local fauna and flora is reflected in the name given to a New Caledonian grass finch, poephila paddoni (registered in 1858), by a visiting English ornithologist.

Paddon died of a pulmonary infection on February 13, 1861 on the île Nou. In 1866 his ashes were transferred with great ceremony to his property at Païta, also known by then as Paddonville, where a monument had been built to him by his nephews (Moniteur 1866). His tomb was classed as a historical monument by the Province Sud in 2012 while the Païta museum hosts a permanent exhibition on the “colons Paddon”. A local primary school is named after him.

Image: approved for use by author

Shineberg, Dorothy. 1967. They Came for Sandalwood: A Study of the Sandalwood Trade in the South-West Pacific, 1830-1865. Melbourne: Melbourne University Press.