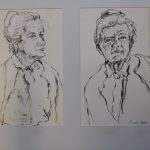 Mary Hope St Clair Crampton was born in Renmark, South Australia, on 18 May 1901, the only child of John Crampton (from northern England) and Amy, née St Clair (from Scotland). Having received early schooling from her father, Hope completed her secondary education at Girton Girls’ School in Adelaide, achieving distinguished results at the Higher Public Examination in 1918. She proceeded from there to study Arts at the University of Adelaide, completing her BA in 1923 with Class II Honours in Classics. She subsequently enrolled in an MA, which she was awarded in 1926 and for which she presented credits in English III, French III and Philosophy. Her thesis was a comparative study of Shelley and the French Parnassian poet Leconte de Lisle.

The following year, she won a free passage to Europe from British Passenger Lines for the purpose of continuing her studies, and spent two years in Paris, where she earned a Diploma from the Institut de phonétique. In 1930, she was appointed as an assistant lecturer and tutor in French at the University of Adelaide, joining her father, who had commenced duties there in 1918 as Lecturer in French Language and Teacher of French in the Elder Conservatorium.

Hope Crampton’s primary area of responsibility was the development of speaking skills in French. A particular requirement was that she establish a ‘French Language Club’, where students could practise their oral skills, and this she promptly did. Attendance at the weekly club meetings, which in 1930 were held on Thursday evenings and were of two hours’ duration, was compulsory for all students of French. First-year students were required to attend an additional oral class of one hour on Saturday mornings. Participation in the Adelaide University French Club, as it was renamed in 1952, remained compulsory for undergraduate students of French until 1958. At its meetings, students were able to engage in general conversation, but Hope also encouraged them to practise their French by playing games and acting out scenes from plays, such as the comedies of Molière. The annual French Club play, which has been an integral part of campus life at the University of Adelaide for many decades, has its origins here.

At the curriculum level, too, Hope Crampton introduced a number of initiatives designed to strengthen the oral work her father had introduced in 1927, adding classes in phonetics at all three levels and extra conversation tutorials for French I students. The annual oral examination consequently grew in importance, with students required to complete a dictation test and discuss questions on the rules of pronunciation, as well as read and comment on a passage from one of the set authors and discuss questions of literary history. Questions on pronunciation were added to the oral examination in 1935. This focus on spoken French led to a new regime under which a pass in both oral and written French was necessary for French subjects to be counted as units towards the BA.

Hope Crampton has the distinction of being the first woman appointed to a position in modern languages at the University of Adelaide. She was also the first member of staff in French to record a publication. Her 1935 textbook Gaudissart: A Guide to Better French Pronunciation and Brighter French Conversation (Melbourne, OUP), was widely used in schools and remained a set text for French I over many years. Hope was promoted to Senior Lecturer in 1950. Beyond the university, she was an active member of the Alliance Française in Adelaide and a keen promoter of good relations between France and Australia.

By all accounts, Hope Crampton was an eccentric if redoubtable figure, renowned for her lively wit. She did not suffer fools gladly and was known to react to shoddy student work with a cutting remark and a withering gaze delivered through her famous lorgnette. Hope was also assertive in her views, particularly with regard to literature. One of her former students, Margaret Denat, wrote that she was ‘infectiously enthusiastic’ about writers she liked—among whom Balzac was her favourite—but ‘devastatingly dismissive’ about those she did not. Her passion for all things French, however, was boundless and she inspired many students to go on and become French teachers.

Hope Crampton retired in 1961, having turned 60 years of age (the practice at the time). Her thirty-two years of service as a teacher of French at the University of Adelaide would be equalled only by the man who had succeeded her father, J. G. Cornell. Following her retirement, she travelled through Europe, Russia and Turkey, before going on to spend a year in New Guinea, where she taught English to Ordinands for the Anglican Ministry. She eventually settled back in the Adelaide Hills, where she took up watercolour painting under the guidance of painter Ruth Tuck, whose sketch of Hope hangs today in the University’s French Department. Her last years were spent in the Hahndorf Nursing Home.

Hope Crampton died at 95 on 8 August 1996. In 1962, the year after her retirement, the Adelaide University French Club provided £100 in order to establish a prize in her honour. It stands as an enduring reminder of her contribution to French at the University and of her role as founder of the club for which she was the driving force for over thirty years.