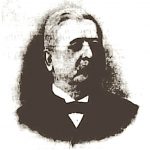 For thirty-two years Louis Thomas Laure was a leading medical practitioner and a very active member of the local French community in late nineteenth century Sydney. He was born on 7 March 1831 at Toulon (Var), the son of François André Laure, medical practitioner, and his wife Claire Antoinette Reboul (born 1802), whose marriage took place on 8 June 1817. Laure senior was born on 23 January 1795 and died of cholera at Toulon during the epidemic of 1835.

Laure received the degree of bachelier ès lettres (Aix-en-Provence) on 3 August 1849 and that of bachelier ès sciences (Marseille) in 1851; in the past this has been reported as 1861, but is unlikely given the other biographical elements, and was probably a misprint for 1851. Graduating from the École de médecine navale (School of Naval Medicine), Laure was appointed 3rd class Naval surgeon on 7 June 1852, and was advanced to 2nd class surgeon on 7 May 1856. He was awarded the degrees of Doctor of Medicine and Doctor of Surgery of the University of Paris in 1861 for a thesis entitled ‘De l’ulcère contagieux de Mozambique chez les Cafres et de son traitement’.

He reached the island of La Réunion in 1853, where his conduct was later described by Petit, the chief surgeon, as ‘excellent’ and his service ‘capable’. The Governor, Baron Darricau, reported in 1858 that Laure had been restricted to the island’s lazaret three times during a six‑month period, caring for smallpox patients among immigrants from the Comoro Islands, of whom 1400 died. To recognise this service, the Governor proposed Laure for the Légion d’honneur, but without success. The following year, Laure gained further praise for his conduct during the two cholera epidemics that ravaged the island, the first starting on 6 March 1859.

On the recommendation of Governor Darricau, Laure was appointed chevalier of the Légion d’honneur on 15 March 1860 for his services during the cholera outbreaks on La Réunion in 1859. This award came with an annual traitement of 250 francs. He married Mlle Adélaïde Mélanie Crémazy (1840–1914), the daughter of a Réunionnais shipowner, on 4 November 1859 at Sainte-Suzanne on the island; she brought a dowry of 25,000 francs.

Due to a number of problems, including personal health problems – he suffered from hepatitis and anaemia contracted in La Réunion – Laure resigned his appointment in August 1861 and returned to France with his wife and child.

Nevertheless, he returned to La Réunion and practiced medicine as a civilian for seven years. However, the island’s economy, based on agriculture, especially sugarcane, deteriorated and, in early 1868, acting ‘on the advice of a few friends’ (Le Courrier australien, 3.11.1900) he travelled alone on board the barque Félix Bernabo, reaching Sydney on 28 February 1868, his family apparently arriving later. The NSW Government Gazette of 7 January 1879 confirms the date of his first medical registration as 7 April 1868. He was authorised, by a decree of the President of the Republic, dated 7 April 1874, to reside in Sydney.

In 1874, he joined the staff of St Vincent’s Hospital, Sydney, as a visiting physician. He also set up in practice at 131 Castlereagh Street, Sydney, where he was burgled on 3 June 1870; two cases of surgical instruments, of a value of £20, were stolen. The burglar, James Gordon, was arrested and the instruments recovered. At one time, Laure also practiced at 47 Castlereagh Street, Sydney.

In October 1884, Laure was among a group of about 10 doctors who resigned from St Vincent’s Hospital in protest at the appointment of one Dr Charles William MacCarthy.  MacCarthy had recently arrived in Sydney from Ireland and was appointed to the hospital in spite of his unsatisfactory medical qualifications following pressure from Archbishop Moran, the Roman Catholic Archbishop of Sydney.

Laure was a very active member of the French community in Sydney, regularly attending social events and the 14 July celebrations. When the French Association of New South Wales gave a Soirée littéraire et musicale in homage to the memory of Victor Hugo on 3 September 1885, Laure took a prominent part in the proceedings, giving a lecture on Victor Hugo, his life and his works, and performing one of Hugo’s balads “Le Géant”. At functions, he often performed music, accompanied by his wife. Such an occasion was a dinner party and reception given in July 1893 at the French Consulate-General for the captain and officers of the French cruiser Duguay-Trouin (Illustrated Sydney News, July 1893). His love of music was reflected in his association with the Sydney Orchestral Society from its foundation in 1892. At the Orchestral Society’s concert held in the Town Hall on 4 October 1900, Laure was presented with the gold badge of the Society in recognition of his efforts to promote the cultivation of fine music.

Louis Laure also played a major part in The Sydney French Club. He was its founding president when the club was created as the ‘French Association of New South Wales at Sydney’ in 1885, and was also president in 1886 when the Club was renamed. He often sang at the Club’s dinners. The membership was strongly middle class and the Club closed in 1893. He had organised the first known 14 July celebrations in 1885. French Consul Julien Decourt encouraged the founders of the Association, including Laure, to assist Frenchmen to achieve a safe position in Australia. The Club, although primarily a gentleman’s club, also had a charitable role. It helped Frenchmen, including those of lower socio-economic status.

In 1891, Laure, along with other members of the French community, was one of the founders of the Société française de bienfaisance, and served as its president and honorary physician for many years. The Société continued for approximately 120 years, with much support from local French businesses, and provided help, often financial, and advice to distressed French men and women, including prisoners. It collapsed in 2012 due, in large part, to lack of financial support by many French companies which had their charitable activities determined in France. In January 2013, Le Secours français de Nouvelle-Galles du Sud/French Assist was founded to replace the Société française de bienfaisance.

After thirty-two years’ service in Sydney, Laure decided to return to France at the urging of his children, and to settle in Marseille. On 27 October 1900, before his return to France, Dr Laure was entertained at a banquet d’adieu held at the fashionable ‘Paris House’ restaurant organised by his colleague, Dr Emile Rougier, the representative in Sydney of the Pasteur Institute. The banquet was presided by Louis Vossion, Consul in charge of the Consulate‑General. The long-standing Consul-General, Georges Biard d’Aunet, was absent in France. A large number of French and Australian friends attended, although no women were present. It was reported to be ‘one of the most representative gatherings of French residents that have taken place in Sydney’ (Le Courrier Australien, 3.11.1900). Aside from Louis Vossion, other attendees included Dr Henry MacClaurin (MLC), T. Slattery (MLC), R.B. Wise (Attorney-General), Judge Backhouse, as well as the Consuls for Denmark, Italy, Russia and Spain. M. Georges Playoust (President of the French Chamber of Commerce) presented Dr Laure with an illuminated address on behalf of the French community. In his speech, Louis Vossion declared that Dr Laure displayed the best qualities of his countrymen: ‘la franchise, la bonne humeur, l’amour des beaux-arts, le regard loyal et la main largement tendue’. Successive speakers praised his courage and devotion to his patients, rich or poor, his charity work and his central place in the life of the French community, a place that many felt would be difficult to fill. The ceremony and the address declared him to be one of the most popular personalities in the French community in Sydney, highly regarded both as a citizen of his own country and a friend of Australia.