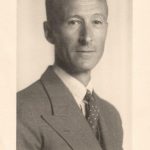 French diplomats had been representing their country in Australia for a century or so when, at the onset of World War II, the controversial Vichy-based government of Philippe Pétain took control of the French State. Consul-General Jean Trémoulet, stationed in Sydney, and Charles Lancial, Melbourne’s consul, joined their counterparts worldwide in largely embracing the new regime, but a majority of French Australians responded instead to the ringing call for resistance issued by Charles de Gaulle in June 1940.

Sydney’s French community had never warmed to Jean Trémoulet, and some of his closest associates privately condemned him as vindictive and self-serving. Moreover by late 1940 the Australian government had come to regard his blatant sympathies with Nazism as potentially subversive, and he was quickly deported as a national security risk. On the other hand the government readily accepted the credentials of Charles Lancial, who had only recently escaped from Germany himself. Early in 1941, after Trémoulet had departed, Lancial closed the Melbourne consulate and moved to Sydney in the role of acting consul-general.

Born on 2 August 1893 at Moulins, in central France, Charles Emile Dominique Lancial won the Croix de Guerre 1914–1918 for his service in World War I and subsequently became a career diplomat. After a long stint at Newcastle upon Tyne in England, he worked in the French legation at Riga, Latvia, then briefly in Leipzig, Germany. The outbreak of war forced Lancial and his family­—his wife Inna and his twenty-five-year-old stepdaughter Mariamna—to flee Leipzig, but not before Lancial had signed the papers of nearly a hundred German Jews trying to escape to France. Lancial was forty-six when the family reached Australia late in 1939, and he remained there until Charles de Gaulle’s Provisional Government of the French Republic called him to Algiers in 1944.

Though the Australian government did not accuse Lancial of subversion, his devotion to the Vichy cause soon became clear. The various government intelligence agencies closely tracked his activities, censorship staff scrutinised his mail, and undercover operatives recorded his efforts to garner support for Vichy among his compatriots. They also documented his undermining of the Free French movement led by de Gaulle’s representative in Australia, André Brenac. While Lancial was still in Melbourne, French women reported that he was threatening to harm their families in France if they opposed Vichy. Once installed in Sydney in 1941 he replicated his threats against the mostly Gaullist French community there—behaviour seemingly at odds with his compassionate treatment of the Jewish refugees in Leipzig.

Before and after he left Melbourne, Lancial wrote indignant letters, in impeccable English, to the Australian Minister for External Affairs, Sir Frederick Stewart, over the treatment of Jean Trémoulet. In May 1941 Lancial also tussled with Stewart, this time in the Australian press, when news broke of the landing of German aircraft in French-mandated Syria, prompting Allied fears that Vichy had facilitated the enemy’s access to Syrian airfields and military equipment. When Lancial attempted to defend the Vichy action, a spate of derisive comments from newspaper readers clearly showed that the sympathies of the Australian public lay with his enemies, the Free French. Nevertheless, as he wrote to a woman called ‘Marie Jo’ early in 1942, Lancial believed that he had been able, ‘without losing a single Australian friend’, to ‘explain the reasons for our fidelity to the Pétain Government, and our faith in our country. To say how one can be pro-Vichy without being anti-British’. Another letter, written at the end of 1942, shows that Lancial did indeed have Australian friends, including Melbourne’s Dr W. H. Fitchett and his wife. Lancial was responding to their sympathy over some deeply personal news—that a few weeks earlier the government had revoked his exequatur and was about to shut down the consulate. In fact Lancial continued to live in Sydney, and the consulate stayed at least half open, for some months.

Nevertheless, by mid-September 1943 two of Lancial’s consular staff were on their way to de Gaulle’s headquarters in Algiers. As well as arranging their travel, Lancial ensured that consulate funding of French pensioners in Sydney would continue to flow, and endeavoured to secure the consulate’s archives, as he had been able to do in Melbourne. Contrary to his wishes, the new administration ordered him to hand the documents over to his ideological rival André Brenac. In spite of their differences, however, the Vichy consul and de Gaulle’s man in Australia had already worked together, from the middle of 1942, on behalf of eight Vichy French prisoners sent by New Caledonia to Sydney for internment. Lancial and Brenac visited their countrymen frequently in the following months, trying to expedite their release, while Lancial provided financial aid from his own pocket.

Meanwhile the Anglo-American push into North Africa, which Lancial initially saw as a powerful union between Vichy commanders and Allied forces, inspired him to offer his services to the political entity emerging in Algiers. He was not alone in his disillusionment when Charles de Gaulle confounded expectations by manoeuvring his way into the leading role. Lancial stayed in Australia until mid-1944 when, having ensured that Inna and Mariamna would be allowed to remain in Sydney for the time being, he sailed to Algiers via the United States.

During his years in Australia Charles Lancial served the Vichy cause single-mindedly and attracted a small local following, but voices from the National Archives of Australia and his family’s private papers highlight his complexities. Unlike Jean Trémoulet, Lancial was unquestionably loyal to his homeland and capable of admirable altruism. Yet he did not extend his generous spirit to the French Australians who followed the lead of Charles de Gaulle. Nor does he seem to have recognised in his Gaullist adversaries the passionate attachment to patrie that had underpinned his own life.

Lancial’s devotion to the Vichy regime did not debar him from resuming his consular career after the war. He was made a member of the Légion d’Honneur in 1949, served in Italy and Germany, and died in 1978.