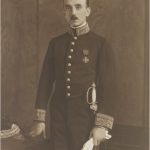 Jean Trémoulet, Consul-General of France in Australia from 1937 to 1940, was born at Bagnac, a French village in the southern region of Occitanie. His son, also named Jean, believed that Trémoulet thought of himself as Occitanian rather than French, and that the culture and politics of this part of France could well have been formative and ongoing influences. Certainly, military service early in the Great War left its mark, possibly damaging Trémoulet’s psychological health as well as his body. He was awarded the Croix de Guerre for bravery in 1914 but sustained a permanently disabling injury to his right hand that also limited the use of his arm. Nevertheless, after graduating in Law at the University of Bordeaux in 1917, he embarked on a career within the French Ministry of Foreign Affairs.

After a series of successful postings, Trémoulet was awarded the Légion d’honneur in 1927, and he spent two years as office chief in the central administration of Foreign Affairs before becoming Consul-General for Barcelona in 1934. At this time the city was capital of the autonomous Catalan region within the Second Spanish Republic, and his knowledge of the Catalan language, as well as English, Spanish and Italian, served him well. Early in the Spanish Civil War (1936–1939) he became frenetically busy. An achievement warmly praised by members of the French colony was his evacuation from Barcelona of French residents, who included thousands of Catholic clergy and members of the bourgeoisie.

Trémoulet’s probity was soon to come under question, however. First, he was accused of charging refugees escape fees for transport that had already been funded by the French government. Then a Paris press campaign linked him with the right-wing nationalist Croix-de-Feu movement. And a little later an incident that is credible in this context came to the attention of Australian intelligence staff. It was claimed that during the Spanish Civil War France’s Socialist Prime Minister Léon Blum had instructed Trémoulet to arrange the escape from Barcelona of a specific group of ten Frenchmen; Trémoulet ignored the order, and the ten (later assumed to have been Socialists) were ‘liquidated’. In December 1936 the Ministry of Foreign Affairs recalled Trémoulet to Paris, declined to allow him to return to Barcelona, and offered him a posting as either Consul-General in Sydney or commercial attaché in London or Milan. He chose the Sydney option.

In mid-1937, when Jean Trémoulet took up his Australian posting, only a few thousand French adults lived in Australia, most of them in urban New South Wales and Victoria. Australian newspapers, government archives, private correspondence and the French weekly journal Le Courrier Australien all bear witness to the new Consul-General’s failure to engage with the expatriate community he might well have been expected to serve. These citizens, many of them associated with the influential Franco-Belgian wool-buyers, had enjoyed warm relations with previous consuls. Trémoulet largely snubbed the local French, choosing at least some of his friends from among diplomatic representatives of Italy and Japan.

In February 1939 the consulate’s newly retired conseiller commercial, Georges Bader, wrote a long, impassioned letter to the Ministry of Foreign Affairs, begging it to remove the Consul-General from his Australian posting. Trémoulet, he claimed, was anti-Semitic as well as anti-British, and capable of pathological spitefulness towards leading members of Sydney’s French colony, including Bader himself. Bader knew about Trémoulet’s tainted service in Barcelona during the Spanish Civil War; he was also aware that the man had barely escaped dismissal at the time.

When France fell to the German onslaught in June 1940 and its new leader, Marshal Philippe Pétain, negotiated an armistice with Hitler, Trémoulet further alienated many in the French-Australian community. Complying with orders emanating from Vichy, Pétain’s chosen seat of government, Trémoulet initiated a campaign of intimidation against those who welcomed the call for resistance launched by Charles de Gaulle. His tactics were primarily personal. He circulated damaging rumours about French men and women who joined de Gaulle’s Free French (later called Fighting French) movement. He frightened and confused families by hinting at reprisals against relatives still living in France. He told the sister-in-law of André Brenac, the newly appointed leader of the Free French in Australia, that it would be ‘unwise’ for her to continue her work as secretary of a French-Australian charity. And he punished the editor of the Courrier Australien by withdrawing the consulate’s subsidy for the paper when it included material showing him in a dubious light.

The Consul-General also fell out with two members of his own staff, who resigned in protest against his behaviour. One of them, Roger Loubère, echoed the views of Georges Bader, describing Trémoulet as gifted and highly intelligent but ‘full of bitterness’. Various arms of Australia’s very active spy network found both these witnesses convincing, and their information, together with reams of secret documents, led the government to move against Trémoulet towards the end of 1940.

On 19 November the Australian Prime Minister, Robert Menzies, cabled Whitehall requesting withdrawal of Trémoulet’s exequatur on the grounds of his ‘anti-British attitude’ and activities ‘causing us much concern’. After delays during which he sought, unsuccessfully, to shore up his personal finances, then a couple of days of undignified detention by military police, Trémoulet sailed from Australia early in March 1941. He arrived in France on 15 June of the same year, and in December moved to Portugal. His Australian companion, Cynthia Powell, joined him there, but their relationship petered out and he returned to France a few months later without her.

Meanwhile Trémoulet had been writing lengthy but apparently unconvincing explanations to the French Ministry of Foreign Affairs regarding his expulsion from Australia. In a letter written while he was still in Sydney, for example, he complained to Foreign Affairs that it had not shown him the solidarity that was due to an agent who had been struck down by a foreign power on account of his loyalty to the French government. Despite his oath of allegiance to Pétain, he received neither a clear appraisal of his work nor the promise of a further posting. He continued to enjoy good contacts in Barcelona, however. In April 1942, for example, the pro-Franco city council awarded him a medal for his evacuation efforts in 1936. Later in 1942 Trémoulet accepted administrative work offered by the Vichy government, some of it in Vichy itself. He was living in Barcelona, however, when the French Provisional Government called him to Paris in 1945 for a review of his actions and charged him with ‘having shown in Australia sentiments that were clearly hostile to Fighting France’. Trémoulet was purged and forcibly retired in 1947. He spent the rest of his life in Barcelona, where his son Jean was born of his post-war marriage to a German citizen, Ingeborg Thienemann.

Trémoulet died in Barcelona at the age of 82, long after the years in wartime Australia that exposed his true loyalties and triggered the unwinding of his diplomatic career. French, Spanish and Australian archival documents all portray the same Jean Trémoulet: complex, clever and cultivated, but essentially self-serving and unworthy of his calling.

National Archives of Australia, especially documents held by the Department of External Affairs, series A981.