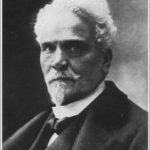 Victor-Henri de Rochefort-Luçay was born in Paris to a father of Legitimist convictions and a staunchly republican mother. By 1853 he had begun to make a name for himself as a pamphleteer severely critical of Napoleon III, at the same time writing theatre criticism, vaudeville comedies and articles for various journals. In 1868 he founded a weekly newspaper of his own, La Lanterne, which was marked by the wit and venom of its attacks on the Bonapartist establishment. Elected in November 1869 to the Corps Législatif as a député for Paris, he was imprisoned for inciting radicals to revolt but was freed from the prison of Sainte-Pélagie by the mob. He then joined the interim Government of National Defence, of which he became the most radical member.

A career which included duels, prosecutions and more than one imprisonment made Rochefort one of the best-known political and journalistic figures of his day. He was befriended by Victor Hugo, his portrait was painted by Gustave Courbet and Edouard Manet, and a bronze of him by Jules Dalou stands today in the Musée d’Orsay. He was to lend his name posthumously to streets in Paris and other French cities as well as to at least one high school.

In May 1871, his openly expressed sympathy with the Communards led to his arrest. Following periods of detention in La Rochelle, Fort Boyard on the Ile d’Aix, a dungeon in the citadel on the Ile d’Oléron and finally the citadel of Saint-Martin on the Ile de Ré, he was sentenced to deportation to the penal settlement on the Ile Ducos near Noumea.

On arrival in New Caledonia, Rochefort caught up with two other deportees who were his former colleagues as political journalists, Paschal Grousset and Olivier Pain. Soon joined by the former journalist and member of the Commune François Jourde, and later by fellow-deportees Bastien Granthille and Achille Ballière, the political prisoners hatched an escape plan. Enquiries revealed that an Australian by the name of Captain D. Law would be happy to have the deportees board his three-master collier the P.C.E. (Peace, Comfort and Ease) and take them to his home port of Newcastle in return for the payment of 10,000 francs.

The events of the next four months are the subject of a number of chapters in Rochefort’s book Retour de la Nouvelle-Calédonie: de Nouméa en Europe, published in 1877. His account of the time spent in Australia is a curious mixture of first-hand observation and half-digested hearsay.

Their arrival in Newcastle in late March 1874 coincided with a visit to that city by the New South Wales Governor Sir Hercules Robinson, in whose honour the ships in the harbour were festooned with pennants. Their immediate assumption, that this display was to celebrate their arrival, was soon dispelled, though it might as well have been a fact, since their visit was greeted with enormous curiosity, the Newcastle Chronicle reporting that the arrival of ‘six of the most prominent French State prisoners’ had ‘thrown the city into a state of some excitement’.

The payment of Captain Law (their chief business in Newcastle) having been arranged, the party set out for Sydney, where Rochefort was impressed by the harbour and its islands, the most important of which he called ‘le fort Macarie’, and particularly noticed ‘a jumble of terraced houses’ to which he gave the name ‘Vooloomooloo’.

The Sydney Morning Herald was somewhat more guarded about their presence than the Newcastle Chronicle, conceding only that ‘the Parisian Communists have this excuse, that what they did was not done in a time of profound peace, but in a time of almost anarchy.’

The high point of the Frenchmen’s time in Sydney was the reception accorded them by the leading civic and political figures of the day.  A group of Sydney’s most prominent citizens visited them at their hotel to present them with a testimonial address assuring ‘their lordships’ of their best wishes. As to politics, they were taken under the wing of the Hon. David Buchanan, a politician of republican leanings described by Rochefort as ‘the most popular orator in the Parliament’, though later characterised in his Australian Dictionary of Biography entry as a bombastic demagogue. Buchanan arranged for them to attend a sitting of the Legislative Assembly, and was to take up the defence of the ‘refugees’ against attacks on them by the French Consul in Sydney, Eugène Simon.  The latter had written to the Sydney Morning Herald stating that it was his ‘duty to let the public know the truth’ about Rochefort and the others, namely their involvement with crimes committed during the Commune.

Filling in time until sufficient funds arrived from their friends in France to pay for their hotel accommodation and the sea journey to London, they visited a racetrack, Rochefort observing that Australian bookmakers seemed as anxious to fleece the public as those of Longchamp. Almost an entire chapter of his account is given over to a description of Sydney’s Botanic Gardens (to his eyes a kind of antipodean Bois de Boulogne). A journey up the Parramatta River resulted in the capture of a wallaby, which was installed in the Botanic Gardens with a plaque reading ‘Wallaby from the banks of the Parramatta River, donated by M. Henri Rochefort’.

On return from Australia, Rochefort revived his journal La Lanterne in London and had it smuggled into France inside English newspapers.  He later moved to Switzerland, returning to France when the Amnesty Bill became law (11 July 1880), and was welcomed at dinner by Victor Hugo. He then founded another newspaper, L’Intransigeant, and was soon promoting the revanchist General Georges Boulanger. Having begun his career as a supporter of the extreme Left, he gradually moved further and further to the Right. During his final years, he wrote for the conservative and nationalistic press, becoming a close ally of Charles Maurras.

He died on 30 June 1913 at Aix-les-Bains. His grave in the Montmartre cemetery is surmounted by a sculpted bust of Rochefort by his son-in-law Frédéric Dufaux.

Despite its many inaccuracies, Rochefort’s account of life in Australia is colourfully written in his idiosyncratic journalistic style, and his fame in his native France guaranteed it a wide local readership. Its generally positive picture of Australian life and culture fostered French interest in this country, while the welcome afforded the visitors by most of the Australians they met was a tangible sign of the cordiality of French-Australian relations at the time.