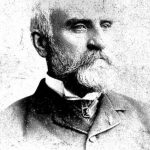 Charles Duret was the first French physician to establish an enduring practice in Melbourne, where he served from 1869 to 1888.

Duret was born in Jersey to Armand Duret and Marie Anne de Montbrun. Armand Duret, also a medical doctor, had served as a junior surgeon under Napoleon I in 1813 and 1814. Charles did his early schooling in Caen, and completed his medical degree in Paris in 1855. The following year, he married Marie-Joséphine Amiclia, from southern France, whom he had probably met when volunteering in the fight against a cholera outbreak in that region during his medical studies. In 1859, while living in Paris, he again volunteered, this time to help treat wounded soldiers returning to France during the Emperor’s campaign against the Austrians in Sardinia. In the early 1860s, to escape the noxious urban air, the Durets settled in the little village of Arrou, near Chartres.

Amiclia’s fragile constitution was a key reason for the Durets’ journey to Australia. Deeply affected by the deaths of two brothers who were serving in Napoleon III’s military and naval forces and then, by that of her mother, she was ordered by her physicians to undertake a long sea voyage. With their two daughters, Suzanne (twelve) and Charlotte (five), they arrived in Melbourne in 1869.

Finding the newly burgeoning city both stimulating and congenial, Dr Duret set up a medical practice in Spring Street, which rapidly became very successful. Within a few years, he had bought land in what would become the fashionable suburb of Albert Park, and built a free-standing eleven-room house, which was for many years a landmark and still stands today at 34 Ferrars Place, South Melbourne. By this time, the Durets’ third daughter, Marguerite (always known as Paquerette) had been born (1876), and the family were to live in the home they named ‘Arrou’ for twelve years.

As a physician and surgeon, Duret served both the small French community and the general Australian one, working regularly with the Coroner Richard Youl, and building up a private clientele of prominent Melbourne figures, which included the Victorian Premier, Albert Berry. The doctor was also an active citizen within his local and the wider community: he donated to various charitable causes, some, but not all of them, Catholic, and was an entrance referee for the local Albert Park Ladies’ College. In 1875 he chaired a committee to raise funds for the French people who had suffered from the deadly flooding of the Garonne. Among the good friends of the Durets were the pastoralist John Simson and his family, the John Gavan-Duffy family and the Reverend James Corbett, pastor at St Mary’s Church, St Kilda, and later Bishop of Sale. Duret was an ardent hunter and outdoorsman and owned a farm at Melton.

In 1884 he was decorated with the Legion of Honour at the recommendation of the Melbourne French Consul, Eugène Ortolan, who praised Duret’s distinguished reputation in Melbourne, his personal generosity to needy French expatriates, his patriotism, and his ‘attachment to our current institutions’. Because of Duret’s eminent position, the Consul believed the award would strengthen the reputation of the French Republic among Australians.

In 1878 the Durets’ oldest daughter, Suzanne, married Léo Caubet, the acting French Consul. Shortly thereafter she accompanied him to a posting in Breslau, which was followed by a role as Consul General in London. In the mid-1880s Duret began to prepare for retirement in France. In order to protect the practice he had built up in Melbourne he followed the advice of Paris colleagues by recruitingthe young Dr Marcel Crivelli to replace him. Crivelli arrived in Melbourne early in 1887 and promptly fell in love with the second Duret daughter, Charlotte. The couple married later that year.  [See Charlotte Crivelli FADB article.] The Durets’ youngest daughter, Paquerette, was at that time a prize-winning student at Berthe Mouchette’s ‘Oberwyl’ school.  After Charlotte’s wedding Duret sold his farm and returned to France with Amiclia and Paquerette, retiring to the Riviera. ‘Arrou’, the house in Albert Park, was left to Charlotte and her husband.

In the following years, Charles Duret kept in close touch with his Melbourne son-in-law, providing him with regular updates about medical developments in France. He died of a tragic accident in Beaulieu in 1895, fracturing his skull as a result of a fall on a staircase. Ironically, Amicléa, whose delicate health had so dominated the family’s early years, outlived her husband by more than two decades, dying in Paris in 1922 at the age of 88.