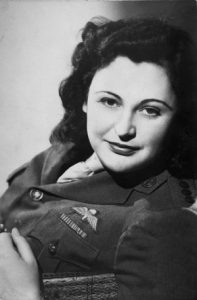 Nancy Wake, a New Zealand-born Australian, was a heroic resistance fighter in the Second World War, notably serving alongside Maquis groups in the centre and south of France. On 29 February 1944, with France under German occupation, she was parachuted into the Allier department of the hilly French Auvergne. She was thirty-one and a British secret agent, sent to support French resisters to combat the Nazi peril. It was to mark her greatest contribution to the Allied cause, embarked on in 1940 and maintained until 1944.

Wake, born in Wellington on 30 August 1912, moved to Sydney with her family in 1914. Her childhood was marked by poverty but an unexpected inheritance from an aunt enabled her to leave Australia in 1932. After travelling to Vancouver and New York, she moved to London where she enrolled in Queen’s College of Journalism; in 1934, domiciled in Paris, she secured a post as a freelance reporter in the French office of Hearst’s American newspaper. Her assignations in Europe exposed her to Nazi oppression and Hitler’s expansionist programme that culminated in the invasion of Poland in September 1939, prompting a declaration of war by France and Britain. In November she married wealthy industrialist Henri Fiocca in Marseille. Only after the war did she learn that he had died, having been arrested, tortured and executed by the Gestapo for refusing to reveal her whereabouts and identity. By then the Germans had dubbed her ‘The White Mouse’ due to her baffling ability to elude notice and avoid capture. The name was used in the title of her 1985 autobiography, largely devoted to recounting her wartime activities.

After serving as a volunteer ambulance driver following the German invasion of northern France in 1940, Wake went south, initially participating in resistance activities as a clandestine courier. It led her to join the Pat O’Leary Line, an undercover circuit that escorted escapers, notably Jews, downed airmen and evaders of German labour recruitment, along the south coast via safe houses to neutral Spain. Wake’s role was highly risky: posing as a wealthy woman given to travel and holidays, she carried and delivered secret mail, harboured those on the run in her Alpine chalet and accompanied fugitives along the Line. In November 1942 the Nazis occupied France’s previously free South Zone, making the O’Leary operations increasingly dangerous, and when Wake’s phone was tapped by the Gestapo and the Line betrayed, she was forced to flee. After six abortive attempts and a series of hair-raising escapades she, with six others, crossed the Pyrenees led by sympathetic local guides. By the time she reached London in June 1943 she had helped bring some 1,037 fugitives to safety.

Anxious to resume her resistance activities, Wake enrolled in the Special Operations Executive (SOE), a British intelligence organisation masterminded by Churchill to provide the means, material and intelligence staff to European resistance cells. The sixteen-week training period, in which Wake reputedly excelled, included tuition in unarmed combat, demolition and survival techniques and aptitude in code-breaking, impersonation and disguise. On arrival in France and bearing the code-name Hélène, Wake joined the regional Maquis—one of the rural guerrilla bands of the French Resistance—liaising with London, receiving nocturnal parachute drops, distributing the contents (money, equipment and arms) to the resisters, and assembling weaponry. Thanks to her training and fluency in French she was a proficient instructor, an adept markswoman and a knowledgeable spy.

Remarkably, Wake moved easily in the company of her male co-fighters, invariably sleeping alongside them on forest floors in between skirmishes and covert forays. Her stamina, good humour and courage earned the admiration and trust of the men, cemented when she accomplished the now much-cited ‘bike ride’ (for which she was awarded the British George Medal in 1945): motivated by the loss of the group’s radio, which her radio transmitter had had to bury and abandon in a hurried retreat, she cycled north on a round trip of 500 kilometres in seventy-two hours, dodging German road patrols by heading over open fields, finding a secret contact with a radio and alerting London headquarters. On her return, hailed by her comrades, she learned that a new radio, along with an operator, had indeed arrived.

In the latter stages of the war, Wake joined the Maquis group of Henri Tardivat with whom she carried out ambushes, raids and sabotage in line with Churchill’s Operation Overlord. His strategy was to distract the Germans by concerted retaliations to the north and east while executing his surreptitious D-Day assault on the Normandy coast and subsequent invasion of occupied territory. It saw her assume her most militant role as she assisted Tardivat in blowing up bridges and enemy vehicles, distributing arms in the midst of battle and, on one occasion, leading an assault and rescuing two American officers. Such events, highly perilous and crucial to the success of the Allied cause, reveal the unique strengths of Wake’s character: daring, determination and an ability to respond to dangerous situations with ingenuity, courage and unhesitating speed. Indeed, her commitment to action and her indomitable spirit rank her as one of the most heroic women fighters of the Second World War.

After the Liberation of Paris in August 1944, SOE agents in France were recalled even though fighting continued until the German surrender in May 1945. Her role over, Wake arrived in London on 16 October 1944, but, in one of her proudest moments before the war’s end, she returned to France accompanied by Colonel Buckmaster, the head of the SOE, on a tour of honour of Allier and the Auvergne.

In 1949 Wake returned to Sydney where she ran as a Liberal candidate, albeit unsuccessfully, in the 1949 and 1951 federal elections, but she failed to settle down after her dramatic life abroad and left for England in 1951. She joined the Air Ministry, lecturing on evasion and survival methods, for which she wrote a manual; she then helped prepare the United Nations interrogation reports on POWs who had survived the Korean War. In 1957 she married John Forward, a former RAF bomber pilot, and lived with him in Malta until 1959, then in New South Wales. After Forward’s death in 1997, she returned to England in 2001, initially residing in the Stafford Hotel in St James’s Place, near Piccadilly. In 2003 she moved to the Royal Star and Garter House for Disabled Ex-Service Men and Women, Richmond, London, where she stayed until her death in Kingston Hospital on 7 August 2011. As was her wish, her ashes were strewn in the Auvergne where she had courageously served and made so many friends.

In her lifetime Wake received numerous awards for her wartime bravery: notably, and in addition to the George Medal, the Croix de Guerre with Palm and Bar; the Croix de Guerre with Star; the Médaille de la Résistance; the American Medal of Freedom with Bronze Palm; Chevalier and, later, Officier de la Légion d’honneur; latterly, the Companion of the Order of Australia (2004) and New Zealand’s RSA Badge in Gold (2006). Her medals are currently on display in the Second World War gallery of the Australian War Memorial Museum in Canberra. In 2010, the year before she died, a heritage pylon was unveiled in her honour in Wellington, near where she was born.

Wake, Nancy, The White Mouse: The autobiography of the woman the Gestapo called the White Mouse, Macmillan, South Melbourne, 1985.