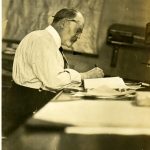 Georges Playoust was one of a family of seven, born in Tourcoing in 1855, the son of a schoolmaster at the renowned Collège de Tourcoing. Little is recorded of his childhood, but detailed military records reveal his shortish height and grey eyes, without mentioning his engaging smile. He completed secondary school and was employed by Henri Caulliez Laines as a trader. His employment with Caulliez was interrupted only by periods of compulsory military service where he reached the grade of Captain, showing a capacity for leadership.

The prosperous wool trade between France and Australia was a positive factor in their bilateral relations and Georges Playoust played a strong role in this relationship. Modern coal-burning steam ships attracted a wave of wool traders and their families from northern France to Australia from the early 1880s. Georges Playoust arrived from Tourcoing in 1889 with his wife Marie-Thérèse and the first five of their children. He was sent by his employer, Henri Caulliez Laines, to open an office in Melbourne, the capital of the colony of Victoria and an important financial centre. They had travelled by a Messageries Maritimes coal-burning steamship, carrying passengers in comfort and, on the return voyage to France, freight, such as bales of wool to satisfy the insatiable needs of the great mills of Lille-Roubaix-Tourcoing. This area was and continues to be a large industrial conurbation adjoining France’s northern border with Belgium.

After renting an office in Bourke Street, Playoust lost no time exploring more of this vast country. He took advantage of a weekly shipping service on the SS Maranoa sailing from Melbourne, steaming up the east coast as far as Cooktown in Far North Queensland. He was quickly challenged by the historic Maritime Strike  which left the SS Maranoa and its passengers stranded outside Brisbane in Moreton Bay. From Melbourne he travelled by train to Adelaide to attend wool sales. Returning to Queensland by train, he encouraged pastoralists to establish a wool exchange in Brisbane.

In 1891 Playoust sailed to France en famille on the steamer Polynésie and his employer presented him with extra support: Georges’ younger brother Joseph, with Blanche, his new bride, and their baby. Joseph remained with Caulliez for the rest of his working life.

The lives of these two families were determined by the dates of the wool seasons and the long return journey every second year to Tourcoing, an essential link between buyers and manufacturers. In 1895 the surge in the Sydney Wool Exchange attracted both families to relocate to Sydney, and to find suitable schools for their children.

Georges Playoust participated in Sydney business affairs, and his kindly personality won many friends. When the need arose for a French-Australian Chamber of Commerce a meeting was held, with consular support, to frame a constitution and elect a committee. Georges Playoust was elected President. The Consul-General hosted a banquet to launch the Chamber, which functions nowadays as the French Australian Chamber of Commerce and Industry (FACCI). Sir George Reid, Premier of NSW, accepted the Consul-General’s invitation to attend the banquet, together with a cohort of ministers. The Colonial Treasurer, Mr Carruthers, in toasting the success of the new Chamber, stated that in the last year, the direct exports from NSW to France totalled £1,699,000, whereas direct imports from France totalled only £214,000. The chief problem facing the new Chamber remained the balance of trade which so favoured Australia.

The French Consul-General and Georges Playoust were delegated by the Chamber to furnish the French Board of Trade with information on proposed new shipping routes giving access to northern French ports. Georges was appointed Councillor of French Foreign Trade. He combined attending an international Congress of Trade and Shipping with a visit to the lavish Exposition Universelle in Paris. This experience was later to be of use to him at the time of Federation of the separate Australian colonies into one Commonwealth of Australia. The city of Sydney was lavishly decorated and he was appointed to chair a committee to present Lower Pitt Street as ‘the French Avenue’.

Georges Playoust continued to be a significant operator at the Sydney Wool Exchange, founding his own buying firm in 1905 to provide a future for his sons. Global events in 1914 shattered this way of life when Germany invaded neutral Belgium, and war was declared. European nations mobilised their troops. In Australia the Playoust men and many others of military age were told to report immediately to their regiments in France.

Georges and Marie-Thérèse were on a return trip from France when war was declared. Arriving in Sydney, the couple acted to help the Allied cause. With friends, they discussed the formation of an important charity  which would send clothing and comforts to the new victims of war—widows and orphans. It was named The French-Australian League of Help (FALH). This great wartime fund-raiser marked a highpoint of French-Australian relations. At a large public meeting at the Hotel Australia, mutual respect between Georges Playoust and William Holman, the francophile Premier of NSW, was demonstrated by the election of the Premier and Marie-Thérèse Playoust as co-presidents of The French-Australian League of Help.

Following the threat of German invasion of France, Georges and Marie-Thérèse Playoust returned to Paris where they could look after their soldier sons if they were ill or on leave. They helped the League of Help’s distributions in Paris and made contacts with existing French orphanages and charitable funds. Marie-Thérèse, renamed ‘Patron’ was replaced as co-president by Joseph Playoust’s wife, Blanche. Georges was treasurer until 1918. Australians responded generously to their appeals.

By the end of the war, five of Georges’ sons had served as French soldiers and two had lost their lives. Of Joseph’s sons who served, one fell in the last weeks of the war. Georges Playoust died of pneumonia a week before the armistice. Although he had lived in Australia for less than thirty years he was well remembered. Premier Holman wrote in his eulogy: ‘he has lived a life of very great usefulness to his country, has been of inestimable service to the wool trade of this state and has closed a life full of beneficent activity with signal service in the interests of his suffering countrymen in connection with the war’.