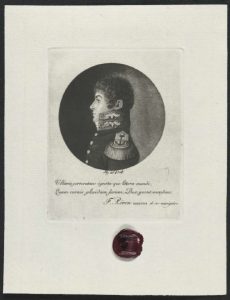 Louis-Claude de Saulces de Freycinet, also known as Louis de Freycinet or Louis Freycinet, was a naval officer, maritime explorer and member of the Académie des Sciences. He played a prominent role in the Australian expedition led by Nicolas Baudin (1800–1804) and later commanded his own scientific voyage around the world, 1817–1820.

Freycinet was born on 7 August 1779 at Montélimar (Drôme). He was the second son of Louis de Saulces de Freycinet, merchant, and Elisabeth Armand, daughter of the Prince of Monaco’s intendant general. Freycinet joined the navy alongside his older brother, Henri, in 1793, at the height of the French Revolution’s Reign of Terror.

The Revolutionary Wars provided Freycinet with ample opportunity to develop naval experience and skills. By 1796, he had participated in three battles against the English and risen from 5th– to 2nd-class midshipman. In 1797 he resisted a promotion to the rank of sub-lieutenant, believing that it was based on favour not merit, but the decision could not be repealed.

In July 1800, Louis and Henri joined the Baudin expedition: Henri, aboard the Géographe and Louis, on the consort vessel, the Naturaliste, with Commander Emmanuel Hamelin. The expedition set sail on 19 October 1800 to chart the southern, Tasmanian, western, north-western and northern coastlines of Australia, as well as to study the natural history and human inhabitants of those regions. It is believed that Baudin named Freycinet Peninsula in Tasmania after Louis; however, the sources are unclear: it may have been in honour of either Louis or Henri, or both brothers.

At Timor, Louis was promoted to acting lieutenant and, in Sydney, he was given command of a new vessel, the Casuarina. The Casuarina replaced the Naturaliste, which returned to France with the expedition’s natural history collection. After leaving Sydney, Louis travelled along the southern and western coasts of Australia, leading geographic and cartographic studies of the Hunter Islands Group, the Spencer and St Vincent Gulfs, King George Sound, Cape Leeuwin, Nuyts Archipelago, Edel Land and De Witt Land.

By the time the expedition arrived at Lorient, 25 March 1804, Freycinet had developed a devotion to maritime exploration. He took responsibility for publishing the expedition’s hydrographic atlas (1811), which included the first full map of Australia, and the geography and navigation volume (1815). He also completed the second history volume of the Voyage de découvertes, begun by François Péron (1816).

That same year, Freycinet put forward a proposal for a voyage which was accepted by Louis XVIII. Marking a turning point in maritime exploration, the focus of this voyage was not to be discovery or hydrography, but scientific research. As directed by a committee formed within the Academy of Sciences, the voyagers were to conduct measurements of the globe’s southern hemisphere, observations of magnetic and meteorological phenomena, experiments relating to air pressure and sea temperature, and studies in natural history and anthropology. Freycinet was given command of the expedition and his choice of officers and crew members. He manned the Uranie with care, by forming a crew largely of men who were labourers as well as sailors, and choosing, instead of civilian scientists, three naval surgeons to carry the main responsibility for natural history and anthropological research. He was accompanied, although it was against all the rules, by his wife Rose, initially disguised as a man. The Uranie set sail from Toulon on 17 September 1817 and reached Oceania, where the bulk of its observations were conducted, one year later. Between Shark Bay, on Australia’s west coast, and colonial Sydney-Town, on its east, the Frenchmen explored Timor, the Papuan, Caroline, and Marianna Islands, and Hawaii. The smooth voyage was subsequently marred by shipwreck at the Falkland Islands; however, both the men and the products of their research made it ashore, and Freycinet obtained a new ship, renamed the Physicienne. Back in France from 13 September 1820, he was not blamed for the shipwreck, nor disciplined for smuggling his wife Rose onto the expedition, but was promoted from commander to post-captain.

Freycinet thereafter concentrated on voyage publications and the field of geography. He co-founded the Paris Geographical Society, became a member of the Academy of Sciences (geography and navigation section), and gained a place on the Bureau of Longitude. He was named Knight of the Order of Saint-Louis and a member of the Legion of Honour. He also published a second edition of the Baudin expedition’s historical account (1824) and, with certain of his co-voyagers from the Uranie, completed the Voyage autour du monde (1824–1844). Freycinet died of a heart attack on the family estate at Saulces-sur-Rhône, 18 August 1842.

Starbuck, Nicole, 2013, Baudin, Napoleon, and the Exploration of Australia, London, Pickering and Chatto.