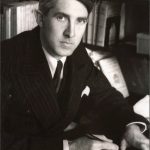 For over three decades, from just before World War II till the end of the 1960s, James (Jim) Cornell championed the cause of French at the University of Adelaide. His influence also extended more broadly to the cultural life of South Australia, through his promotion of the arts. Admired and respected for his deep knowledge of French language and culture, ‘JGC’ or ‘the Prof’, as he came to be known, had a profound impact on his students, many of whom went on to distinguished careers in academe or as school teachers.

James Gladstone Cornell was born in Melbourne on 23 October 1904. From 1918 to 1922, he attended Scotch College, where he showed a gift for the study of language and literature: strong in French, he also earned the title of dux in classics and won the Alexander Morrison Medal for essay writing. In his final year he won an Exhibition and Senior Government Scholarship, which enabled him to continue his education at the University of Melbourne. There, he studied French under the tutelage of Professor Alan Rowland (Alec) Chisholm, the renowned scholar and writer whose teaching spawned a generation of leading figures in Australian French Studies, such as Lloyd Austin, Gardner Davies and James Lawler. As part of Cornell’s studies at the University of Melbourne, he attended tutorials in English at Ormond College, where he was an ‘outpatient’ (i.e. he was not a resident of the college). He was taught there by a young tutor named Helen Martin, who was one year ahead of him. They would later marry (in 1931). After graduating in 1925 with first class honours in French, Cornell was awarded the prestigious Aitchison Travelling Scholarship, which allowed him to undertake further study in France. Helen Martin, who had likewise been awarded a scholarship to study overseas, travelled on the same ship as her future husband, though she travelled in first class while he was in second class, his scholarship being less generous. During his time at the Sorbonne, from 1927 to 1929, he impressed his professors with the quality of his French and his knowledge of French literature, and achieved the feat of being placed first, above all the French students, in the final examination for his Licence ès Lettres (on French literature).

In 1930, following his return to Australia, Jim Cornell was appointed Lecturer in French at the University of Melbourne, working with his mentor Chisholm. While developing his teaching skills, he found time to pursue his interest in the arts. He was very fond of music and was an excellent pianist. He also performed in the theatrical productions of the Alliance Française de Victoria, usually finding himself cast as the jeune premier—as Cléonte in Molière’s Le Bourgeois gentilhomme (1935), for example. He also acted in English translations of French plays for the Melbourne Boys’ High School.

In 1938, Jim Cornell moved to South Australia with his wife and the first two of what would be four daughters to take up the position of Lecturer-in-Charge of French at the University of Adelaide. Six years later, in 1944, he was appointed to the newly created Chair in French Language and Literature, making him the institution’s foundation Professor of French, a position he occupied until his retirement in 1969, when he was granted Emeritus status.

Immediately on arriving at the University of Adelaide, Jim Cornell set about expanding the French curriculum, guided by the dual aims of developing language proficiency and fostering an understanding and appreciation of French literature. In 1939, he introduced an honours degree in French and redesigned the existing courses in second year and third year. The reading course in French II was henceforth devoted to the literature of the seventeenth and eighteenth centuries, with the focus in French III on the nineteenth and twentieth centuries. Extra work in both cases was required of honours students, again on a specific period or theme (in 1939: ‘Le théâtre comique depuis 1660 jusqu’à la Révolution’). In keeping with the practice established by his predecessor, John Crampton, lectures on literature were delivered in French in second year and third year, and questions on literature in the final examination had to be answered in French. On an informal level, for many years he had lunch with students once a week in the University refectory so that they could practise speaking French in everyday situations.

For honours students, Cornell also introduced two dedicated courses: Old and Middle French I (taken in second year) and Old and Middle French II (third year). This work in philology and pre-modern literature corresponded very much to Cornell’s own interests and expertise. Having established this solid undergraduate curriculum, Cornell then introduced a Master of Arts in French, to be completed either through coursework or by thesis. The first coursework MA was undertaken in 1945, and the first MA by thesis in French was awarded in 1947.

Student and staff numbers in French increased as a result of Cornell’s expanded curriculum but also thanks to the growth of the University more generally following World War II. While on study leave in Paris in 1951, Cornell negotiated a deal with the French government through which officers of the French education system were made available as lecturers abroad for terms of three years, while retaining their rights and privileges in the French system. The first such appointment, Maurice Valuet, remained in the position until 1957—for six years, not three—and had a number of successors.

On a personal level, Jim Cornell was revered by staff and students alike for his kind and courteous manner and for his encyclopaedic knowledge of French. One former student who paid him a visit at his Kensington Gardens home after his retirement recalls him stopping mid-sentence to apologise for using a French word whose origin he had not verified. This was the kind of self-imposed discipline, she concluded, that had contributed to his ‘exquisite assimilation of the French language’. This deep respect did not prevent students from poking fun at his quirks, especially through the dramatic productions of the French Club, in which well-known plays were parodied. Former student and later Professor of French at La Trobe University, Elliott Forsyth, remembered a mediaeval mystery play in which the soul of JGC was ‘condemned to spend eternity writing essays on the non-dramatic poetry of Victor Hugo’. He also recalled a short piece entitled Trois scènes de la vie cornélienne, ‘centred on the theme of the master’s “flexibility” with regard to time, which culminated in the presentation of a huge hour-glass hastily put together by the Physics Department from two laboratory flasks and some odd pieces of wood’. In 1944, Cornell’s appointment to the Chair of French was marked irreverently by an induction ceremony devised by his colleague Hope Crampton, drawing inspiration from the Turkish ‘mamamouchi’ scenes in Le Bourgeois gentilhomme. Cornell took this light-hearted mockery in good spirit.

An outstanding scholar, Cornell did not, however, produce any research publications. His only published works were an edited collection of short stories, Cinq maîtres du conte français (1936), which regularly featured as a set text for undergraduate students, and a report on the teaching of modern languages in secondary schools in 1939. As he indicated in a radio interview in 1973, he always considered himself first and foremost to be a teacher and felt that he had ‘no aptitude for research’. He nevertheless expressed regret that he ‘wasn’t able to widen the horizons of knowledge’. Tangible traces of his scholarship are still to be found, however. He had the particular habit of annotating books on French language and literature when they arrived in the Barr Smith Library, adding his corrections and comments. The Cornell Collection within the Barr Smith’s Rare Books and Special Collections contains books from his personal library, similarly annotated, and a number of personal and professional papers donated by the family. Other works from his personal library are held by the Rare Books and Special Collections section of the University of Newcastle’s Auchmuty Library.

Jim Cornell’s service to the University of Adelaide and the South Australian community was widely admired and appreciated. From 1939 to 1960 he was President of the Alliance Française of South Australia and was closely involved with the local French community, as indeed he had been previously in Melbourne. During the war years, he made weekly broadcasts in French on Radio Australia for the French-speaking communities of Asia and the Pacific, in which he discussed current issues and encouraged listeners to rally behind the leaders of Free France. His influential role was recognised by the French government in 1955, through his award as Chevalier de la Légion d’Honneur. A fervent promoter of the arts, he served as Chairman of the University Theatre Guild from 1952 to 1956. When the Musica Viva Society first presented concerts in Adelaide in 1948, Cornell became President of the local branch committee and continued in that role until 1983. His contribution to the cultural life of the University and the community is commemorated by the Cornell Chapter, the Creative and Performing Arts ‘branch’ of the University of Adelaide’s Alumni Association.

Jim Cornell’s commitment to education was likewise deep and enduring. He served for many years as examiner for the public examinations in French and was the foundation President of the Modern Language Teachers’ Association. He was Chairman of the Council of Girton School, where his daughters were educated, from 1945 to 1965, and a member of the University Council from 1949 to 1971. In retirement, he delivered classes on French literature for the Workers’ Educational Association and taught part-time for two years at both the University of Adelaide and Flinders University. His lifelong dedication to education was recognised by his election as Fellow of the Australian College of Educators. For his distinguished contribution to the teaching of French and the dissemination of French culture within South Australia, he was awarded the Palmes académiques by the French government in 1964, promoted from the rank of Chevalier to that of Officier in 1965, and then to the rank of Commandeur in 1984.

In a radio interview for the ABC’s ‘Now in retirement’ series in 1973, when asked by Lynne Arnold whether he had ever been tempted to take different turnings in his life, Jim Cornell responded: ‘I came to terms with my limitations and I don’t think there were any turnings in which I could have been successful!’ The range of his interests and the success with which he pursued them belie this modest assessment. Jim Cornell certainly remained active in retirement, his intellectual curiosity undiminished. A major operation in the first half of 1990 did not prevent him from setting out only eight weeks later with his daughter Philippa on another visit to Europe, though he was perhaps aware that this would be his last. Jim Cornell died on 13 January 1991 at the age of 86.

Image: James Gladstone Cornell in his study at the University of Adelaide in 1941