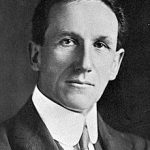 William Holman, was Premier of New South Wales from 1913 to 1920. During that time, drawing on his personal interest in France and the French language, he played a significant role in the deepening of Franco-Australian relations during the war.

Born in London to actor parents, Holman was originally a cabinet-maker, and moved to Australia with his family in 1888. After becoming involved in the trade union movement, Holman entered Parliament as a member of the Labor Party in 1898, aged only 28. While in Parliament, he also studied law and was admitted to the Bar in 1903. He married Ada Kidgell in 1901 and became father to Portia in 1903.

Following time as Deputy Labor Leader, Attorney General and Minister for Justice, Holman became Premier of New South Wales on 30 June 1913. Holman’s Premiership was marred by the conscription debate. Although ideologically a pacifist, he was a strong advocate for Prime Minister Billy Hughes’ first ‘yes’ campaign in 1916—in contrast to the rest of the Labor party. As a result, Holman was disendorsed by Labor and formed a new coalition with his former opposition as the Nationalist Party. After losing his seat and the government in 1920, he practiced law as a King’s Counsel. In 1931, he was elected to the Federal Lower House before his death in office three years later.

Alongside his public life, Holman was a passionate Francophile. He first learnt French as part of his law studies before continuing to do so for leisure. An article in the Sunday Times in December 1912 noted ‘the sum total of [his] relaxation has … been French reading’. In 1913 he holidayed in New Caledonia which he described in his autobiography as ‘a new world’ filled with ‘the inexhaustible interest in French affairs’. His wife’s papers also include memorabilia from holidays in France after the war.

Holman was also involved with the French community in Sydney. During the war, he supported the work of the French-Australian League of Help as its president. The League organised two large fundraisers in 1917 and 1919, raising £215,607 (equivalent to $7.8 million in today’s currency) and £17,709 (equivalent to $476,000 in today’s currency) respectively. Holman’s government also financially supported the League with a £5,000 grant on its formation in December 2014 and with a £4,400 contribution to the 1919 fundraiser.

He regularly used his platform as Premier to praise the French. For example, he delivered a speech to the Sydney University Union in September 1915 when he spoke of what he called ‘our debt to France’. In July 1917, he visited the front line in France where he was injured by an exploding shell which killed his travelling companion Major-General Holmes.

Appropriately, Holman was recognised for his support of the French. In 1916, he was appointed to the French Legion of Honour for his ‘valued and eminent services to the French cause’, as reported in the Courrier Australien . The French community in Sydney held a celebratory banquet, and French president Raymond Poincaré sent him a letter of thanks. In 1918, the head of the French Economic Mission to Australia, General Paul Pau, presented Holman with an autograph book signed by representatives of over eighty charities, thanking Holman and NSW for their support. In turn, Holman professed his ‘debt of gratitude … to France and the French influence on his life’ (The Sydney Morning Herald, 13 September 1918, p. 7).

As Premier during World War One, Holman’s francophilia transformed from a personal interest to a public manifestation. As a result, he played a crucial role in the strengthening of Franco-Australian relations.