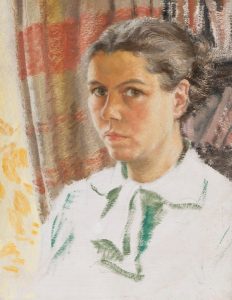 Esther (Stella) Gwendolyn Bowen was a painter who became an official Australian war artist in Britain during the Second World War. She was born in North Adelaide in 1893. After passing South Australia’s Senior Public Examination at Tormore House School, she pursued her early love of drawing by enrolling in the art classes of Rose MacPherson (later Margaret Preston). But it was her travels in Europe and America between 1914 and 1947 that proved crucial to her artistic development as a professional portraitist, a talent that secured her wartime commission in 1944.

Bowen’s childhood education hardly anticipated the professional ambitions and lifestyle she later assumed. Under the watchful eye of her widowed mother, a devout Christian of staid middle-class ideals, she was conservatively femininely raised. But upon her mother’s death in 1914 and armed with an inherited annuity of £200 she was free to leave Australia to seek artistic tuition abroad. On arrival in London she joined Walter Sickert’s reputed art academy, encountering and mixing with some of the city’s most adventurous artistic and literary avant-garde. It was through the poet Ezra Pound that she met the much older critic and novelist Ford Madox Ford (1873–1939), initiating a partnership that was to endure for nine years. It was a match that, although it became latterly emotionally fraught, emboldened the couple to settle in Paris’s culturally vibrant Left Bank in 1922, with their child Julie, who, born in England, was then two.

Early twentieth-century Paris was a mecca for Australian women artists. Dorrit Black, Hilda Rix Nicholas, Kathleen O’Connor, Bessie Davidson and Grace Crowley were all drawn to a city whose impressionist and modernist pioneers had taken the world by storm, although only the potter Anne Dangar and Bowen did not return to Australia. Moreover, for Ford and Bowen the timing was opportune: the postwar French exchange rate was advantageous for visitors and the restrictions imposed by Prohibition and censorship laws in America drew its more progressive writers and artists to Paris for inspiration and contact with the Left Bank’s thriving artistic milieux. It was in the Latin Quarter that Bowen, engagingly gregarious, met and befriended the young Ernest Hemingway and James Joyce, American poet Raymond Guthrie and writer and august salonnière Gertrude Stein. In 1924, in support of the era’s literati and Ford’s burgeoning career, Bowen helped fund and host a weekly ‘at home’ reception for the latter’s short-lived journal, the Transatlantic Review.

In 1941, six years before she died, Bowen published her memoir Drawn from Life, an illuminating recapitulation of her progress from her Australian roots to her gradual and hard-fought rise to professional success and personal independence following her separation from Ford in 1927. Within its pages, frankly and movingly written, she pays special homage to the Paris years. This riveting memoir, both social document and personal review, plots her path to artistic maturity alongside lively evocations of 1920s post-war gaiety, optimism and intellectual experimentation and exchange. Accounts of parties, dances and café encounters vie with reflections on the artistic principles she progressively espoused. Her narrative reveals a woman of quiet achievement: steadfast in her belief in her abilities, discreetly feminist and increasingly resolved to be released from the strain incurred by Ford’s infidelities and domestic demands.

Bowen claims that a visit she made with the Pounds to Tuscany in the spring of 1923 deeply influenced her painting style. On viewing the works of the Proto-Renaissance artists, especially Giotto and Fra Angelico, she was struck by the beauty of their formal composition, the layering of paint, flattening of shapes and attention to decorative detail. These were techniques she adopted and refined, albeit against the grain of the modernist and abstractionist art in vogue. The title of her memoir refers both to its biographical purpose and her dedication to portraiture. Capturing a likeness of people was a gift at which she marvelled and in which she excelled. Those she painted or sketched in Paris are representative of the 1920s circles in which she moved: Edith Sitwell, T. S. Eliot, Raymond Guthrie, Gertrude Stein; more intimately, Ford playing solitaire, herself in a painter’s smock, her daughter Julie in plaits in three-quarter profile. In contrast, a work of 1927 depicts the faces of the patrons and waitresses of Au Nègre de Toulouse (a Left Bank restaurant) clustered around the canvas like Fra Angelico cherubs, each one meticulously delineated and individually portrayed. Group paintings henceforth became a forte. After her separation from Ford and in the wake of the calamitous Wall Street Crash of 1929, Bowen, still in Paris and reeling from the devaluation of the French franc, the onset of the Depression and the resulting paucity of commissions, accepted Ramon Guthrie’s invitation in 1932 to paint portraits, mainly of family groups and their children, in Boston, Vermont and New Jersey. Yet despite the success of the venture, the proceeds were insufficient to sustain her on her return and, with Julie, she left France for London in 1933.

In England, struggling to survive, Bowen led a peripatetic life, successively supplementing her artwork with teaching, a brief position as an art reviewer for the News Chronicle and a small remuneration upon the publication of her memoir. A six-week holiday with generous friends in 1936 produced four works, notably the masterful Provençal Conversation (gifted to the National Gallery of Australia in 2013). It was, however, her appointment as a war artist by the Australian War Memorial in 1944 that produced the body of work that was to be her greatest legacy.

Bowen’s brief, to depict the members of the Royal Australian Air Force stationed in Britain, took her to military encampments around the country, north to Scotland, west to Wales and south to Essex, her last abode. It was on such sites that her skills as a portraitist served her well as she captured the strikingly youthful faces of those who served the Allied cause. Paintings such as Bomber Crew (1944), Halifax Crew, Driffield (1945), and A Sunderland Crew Comes Ashore at Pembroke Dock (1945), all group studies, depict military commitment and solidarity. The men are typically portrayed in their wartime gear: variously badges, caps, gloves, gas masks, parachute tackle, rugs, leather jackets, safety buckles and earphones; some are surrounded by symbolic cameos of doves, planes, logbooks, panel instruments, or hands at work. Poignantly, Bomber Crew was finished using photos when the men failed to return from combat. Single portraits of officers and commanders include Air Chief Marshal Charles Burnett (1944) and Admiral Sir Ragnar Colvin (1944), reminders for posterity of Australia’s wartime leadership abroad. Pleased with her work, the Australian War Memorial extended her appointment in 1945 to paint and commemorate Australian soldiers who had survived the war: POWs (for example Repatriated Prisoner of War is Processed, 1945) and the hospitalised wounded, many severely maimed. In 1946, her war commission over, Bowen planned to return to Australia but her repatriation and pension rights were denied. She died of cancer on 30 October 1947.

Today the Australian War Memorial holds the forty-six oils and drawings she executed during the war, the largest collection of her work in the world. Her self-portrait of 1928 is in the Art Gallery of South Australia in Adelaide, and another, c. 1934, in the National Portrait Gallery in Canberra. The former, in particular, donated to the gallery by Bowen’s niece in 1979, attests to her gift for portraiture, nurtured in the Paris years. The aspiring artist who had left Adelaide not knowing what lay ahead had returned ‘home’ as one who had fulfilled her earliest goals.

In recognition of her accomplishments as an Australian artist in France and abroad, a retrospective exhibition, entitled Art, Love and War, was held at the Australian War Memorial in 2002.