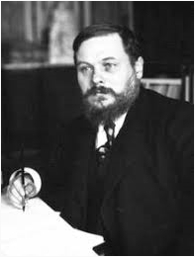 Albert Métin was a French sociologist and politician who took a special interest in Australia, producing a landmark study, Le socialisme sans doctrines (Alcan 1901). Born into a working-class family in Besançon at the beginning of the Third Republic, Métin exemplifies the French republican dream, rising from his humble social origins through the State education system to national eminence. Following an agrégation and a doctorate at the Sorbonne, he worked as a teacher and in teacher training. Although his later career took him into politics, his commitment to education never waned, and he authored several textbooks on history, geography, civics, ethics and the elements of politics and economics.

Métin completed a study tour of socialism in Britain in 1897 and was then awarded a University of Paris travel grant, sponsored by the French Ministry for Commerce to investigate the societies of North America and many parts of the British Empire, including the Australian colonies and New Zealand. He spent five months in Australia from April 1899, meeting with a wide range of people, and gathering a huge volume of documentation. His visit was keenly followed by the press, which published a number of long interviews during his stay. These are filled with Métin’s favorable impressions of the progressive social and educational developments he encountered: universal suffrage, labour laws, agricultural policy, old-age pensions, the practical components of primary education. He made important friendships, including with William Holman, future Premier of NSW, and Australian founding father, Justice Andrew Inglis Clark.

As a thoroughly documented compendium and historical snapshot of Australian society on the eve of federation, Le socialisme sans doctrines was well known to students of Australian history and politics well before its translation in 1977 (Socialism without Doctrine, tr. Russel Ward, Chippendale, NSW, Alternative Publishing Cooperative). This comprehensive mapping of Australasia’s history since European settlement and of current society contains a lot of dry statistical data, but the work is enlivened by its energetic style and its vivid eyewitness testimony. Métin visits farms and factories, reads The Bulletin and Henry Lawson, does not hide his disapproval of the systematic discrimination against Chinese workers, and spends time in the ‘village settlements’ created by state governments to ease urban unemployment and to get more land cultivated. As much as the social achievements of universal suffrage, the eight-hour working day and old-age pensions, Métin admired the ingenuity of a young Australian democracy willing, in the face of the harsh conditions of the 1890s depression, to take risks and to experiment; the spirit of ‘let’s try this idea’ that he found among people and authorities.

Having established himself as an expert on labour laws, Métin began a highly successful political career in 1906 when, on Clemenceau’s recommendation, he was chosen by René Viviani as his chief of staff in the newly created Ministère du travail et de la prévoyance sociale. In 1909, he was elected to the national parliament as representative of the Doubs, and was comfortably re-elected in 1910 and 1914. Before the war he served on numerous governmental commissions, and in 1913 was appointed Minister of Labour, a position to which he returned in 1915 after serving on the Eastern Front. Further service in Foreign Affairs and the Blockade Ministry led to his being chosen to lead the French Economic Mission to Australia in 1918. In preparation for the Mission, Métin visited Prime Minister Hughes in London and the Australian troops on the Western Front, and published two major articles on Australia in France’s leading daily newspaper, Le Petit Parisien. Tragically, he died of apoplexy in San Francisco during the journey to Australia. He was just forty-seven years old. Premier Holman declared the death ‘a heavy loss, a loss to the whole French nation of one of its most distinguished men, in which I feel they will have the deep sympathy of New South Wales’ (The Sunday Times 1918, 2).