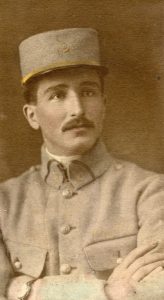 Georges Proust arrived in Sydney in 1900. From 1901 to 1918 he was Managing Director of Le Courrier Australien, the oldest foreign language newspaper still operating in Australia. His career in journalism began when he was already fifty years old, as he settled into the French-Australian community. In Le Courrier Australien’s commemorative 2020 publication, his management was characterised as providing stability to the newspaper. He was remembered for his constant and valiant effort to steer the newspaper through difficult times and financial duress during World War One.

Georges Armand Proust, born in Niort (Deux-Sèvres), was the fourth of five children. His father and uncle owned a successful business in Niort manufacturing products that incorporated horsehair. Horsehair was widely used in making wigs, saddles and harnesses, as well as in upholstery. After the 1789 Revolution wigs went out of fashion, but horsehair had other uses, such as in furniture, carriage trims and mattresses. In the nineteenth century, the firm of MM Proust Frères et Noirot Fils used it as a stiffener in tailored garments, particularly military uniforms, in millinery and for common brushes. For these products the firm received a medal at the 1855 Paris International Exhibition.

Georges was only eight years old when his father Pierre Louis Proust (1807–1859) died suddenly and left his mother, Anne Charlotte Céline Desbordes (1820–1884), with a young family. By 1860 Céline had returned with the children to Bordeaux, where her own family was well established as glove-makers (gantiers) since at least the 1740s. Céline’s parents owned a country house, La Hourcade, in Bruges, where she raised the Proust children. Bruges was a village largely of market gardens north of the city.

In Bruges Georges attended the École Communale but it is unclear where he received his secondary education. He did not follow a career in either of the family businesses. At the age of twenty-one, he joined the shipping activities of his maternal uncle, Jean-Paul Desbordes who was a sea captain for the shipping entrepreneurs, Civrac Armateurs-Négociants. They ran services from Bordeaux to South America and the eastern Pacific. Georges worked first in a ship’s chandlery in London, then later, as a midshipman, he sailed on a three-masted ship around Cape Horn to Chile and San Francisco. However, a career at sea did not hold him.

In 1883 Georges married Berthe Rose Olivier (1863–1948), and they had three sons, Emile, Alfred and Raymond, born in Bruges. From about that time he became involved in local political life. In 1893 and 1894 his name appeared as a répartiteur (a municipal officer responsible for stores) in the Commune of Bruges. Then at the time of the Dreyfus Affair (1895), when the republican government was at a low point, Georges joined other royalistes who supported an unsuccessful return of Philippe, Duc d’Orléans and Pretender to the French throne. Georges stood in the municipal election of May 3, 1896 but was unsuccessful in what was a strongly republican working-class village.

About this time Georges was ill with pneumonia and was advised that a warmer climate would improve his health. Both his election failure and his health prompted him to investigate the opportunities offered in a French overseas colony. He rejected most places because of climate or political instability, but saw the possibility of a new life in the Pacific as one of the Colons Feillet. In the 1890s the Governor of New Caledonia, Paul Feillet (1857–1903), introduced a program to reduce the importance of the island’s penal colony by actively promoting free settlement and the growing of coffee. The French administration called for settlers from France, preferably farmers with some capital, to come to the Pacific colony.

On July 17, 1898 Georges left Marseilles with his wife and sons aboard the MM Armand Behic. They took up a concession in the Amoa Valley near the settlement of Poindimié on New Caledonia’s north-east coast where most settlers who arrived in 1898 received land. With the help of government surveyors and Kanak labour, the land was prepared for construction of a basic three-room dwelling and external kitchen. Once the family had a place to live, they set about establishing the coffee plantation.

However, difficulties caused by isolation, poor soil, the lack of agricultural experience of some settlers, and especially the collapse of the world coffee prices in 1900, resulted in the failure of the Plan Feillet. The Proust family shared these difficulties with fellow settlers but in addition, the family experienced twin disasters. First, in the autumn of 1899, a kitchen fire took hold and consumed their dwelling of timber and thatch. A new house was built, and life was back to normal, when a tropical cyclone and associated floods in March 1900 destroyed their plantation. Not only had floodwaters uprooted the young coffee plants, the soil was washed away leaving only rock and gravel.

After just two years Georges and Berthe were forced to reassess their position and future in New Caledonia. Not only were they doubting the viability of coffee growing, they were particularly concerned about providing an education for their sons. And so they said farewell to the Amoa Valley and left New Caledonia bound for Sydney.

On June 5, 1900 MM Le Polynésien brought the family into Sydney Harbour with their few belongings salvaged from the fire and flood, but with hope for a more stable future. At a meeting with the French Consul-General, Georges Biard d’Aunet, Georges Proust learnt of a position with Le Courrier Australien. Georges seemed to have had the right credentials: his involvement in political and community life in France had given him experience in political writing. In 1901 he was appointed Directeur-Gérant (Managing Director) to work with editor Paul Chauleur (1877–1927).

Le Courrier Australien was established in 1892, when Australian–French relations were growing stronger, and textile companies in France and Belgium looked to Australia as a source of fine merino wool. The newspaper operated from Bond Street Chambers located at 2 Bond Street, on the corner of George Street. The Chambers were the hub of French cultural life, and location of Government associations for which the Consul-General had oversight. In addition to the newspaper, the Chambers housed the French-Australian Chamber of Commerce and Industry, the French Benevolent Society and the Alliance Française de Sydney. Georges found himself happily part of French business and cultural activities in his new city.

During Georges’ association with the newspaper it reported events in France and the French-speaking world, as well as fostering a general interest in French culture and language. It reported on Australian trade with France and with New Caledonia, and advertised French goods and services available in Australia. When notable French individuals in the arts, entertainment or sport came to Australia the newspaper drew attention to their visits and described their planned activities. However, with the outbreak of the war in Europe in 1914, there was sustained focus on events as they unfolded in Europe.

In 2020 the newspaper published a bi-lingual book celebrating 128 years of operation. The authors wrote that, “from 1901, the stability of the newspaper was embodied in the figure of the managing director of the Courrier Australien, G. Proust.” Notions of good faith, moderation, and rectification of false information about France and French life became principles of the newspaper and its editors from this time.

Georges retired from the position of Managing Director in 1918, aged sixty-seven, but remained associated on a part-time basis as a staff member for another decade. His writing interests went beyond practical journalism to include poetry. What was likely his last formal contribution to Le Courrier Australien was a 400-word poem published in 1935. In L’Etang – Souvenir du pays poitevin Georges wrote of the beauty of the Marais Poitevin (wetland) region near Niort, his birthplace.

Less is known about his life in Sydney beyond the newspaper. His name regularly appeared with those who attended French National Day celebrations, and Georges and Berthe remained connected with families from New Caledonia. Proust descendants remember that the education of the Proust brothers was a priority, and that Georges helped them to establish professional careers. The family enjoyed sailing on Sydney harbour in their wooden dinghy, Fleur de Lys. Family ties remained strong. His grandson Frank Proust recalled memorable hours with Georges hearing “wonderful stories” of life in Bordeaux and the royaliste cause.

Le Courrier Australien gave Georges the settled and purposeful work that he failed to find in Bordeaux or New Caledonia. In the small but vibrant French community of Sydney, he also found a sense of place. He became a naturalised Australian citizen in 1904 and the family knew he was grateful for these opportunities. He died aged eighty-seven at his home in Haberfield on April 13, 1937.

Image: Georges Proust in the uniform of a midshipman, taken in Bordeaux c.1871 (Proust family archive)