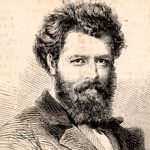 Antoine Fauchery, photographer and journalist, the son of Julien Fauchery, a merchant, and his wife, Sophie Gilberte Soré, was born in Paris on 15 November, 1823, and died in Yokohama on 27 April 1861.

Little is known of his early years other than incidental details, including the fact that ‘he was born without a patrimony’. Fauchery attempted several careers: in architecture, as a wood-engraver, and as an artist. He was one of the bohemian set in Paris with poets Théodore  de Banville, Charles Baudelaire and Gérard de Nerval—all of whom began their literary careers contributing to the popular journal Le Corsaire-Satan —and in their company, Fauchery began his next career as a journalist, contributing many articles to the journal from 1845 to 1848. Fauchery would later be immortalised as the painter Marcel in Henry Mϋrger’s Scènes de la Vie de Bohème on which Puccini’s opera La Bohème is based.

It was about this time that he formed a close friendship with Nadar, the greatest of the early French photographers. Nadar photographed most of the celebrated people of his time for his famous Panthéon published in 1854, and his caricatures of prominent writers and actors included Fauchery, Dumas and Baudelaire, among many others.

After a short creative burst as a writer, Fauchery sailed from London in 1852, bound for Port Phillip where he hoped to make his fortune on the Ballarat goldfields.  Fauchery spent nearly four years in Australia on this occasion, recounting his observations of life in the colony in his series Lettres d’un Mineur en Australie, but not making his fortune. He returned to Melbourne with only sixty pounds in his pocket, and opened the Café Estaminet Français in Little Bourke Street East as a place of retreat for non-British emigrants. The venture was not a success, and Fauchery left Melbourne for London in March 1856. He was in Paris for the publication in January and February 1857 of his Lettres d’un mineur eu Australie, serialized in fifteen instalments in the newspaper Le Moniteur Universel, official journal of the French Empire under Napoléon III.

In his introduction to the volume of the Lettres d’un mineur en Australie, published later in 1857, the poet Théodore de Banville described Fauchery ‘with sparkling eyes, Olympian hair in frizzy disorder, a well-shaped arched nose, heroic eyebrows, thick, red, luminous, ironical, sensual lips…’. In July of that year, Fauchery left Europe forever when he sailed from London with his wife on 20 July 1857. He soon established himself as a photographer at 132 Collins Street East, Melbourne.

A legacy from Fauchery’s second period of residence in Victoria from 1857 to 1859 is the series of photographs which he produced in collaboration with the English geologist Richard Daintree under the title Sun Pictures of Victoria. These depict life at the diggings and in the developing city of Melbourne, with portraits of the  eminent inhabitants of this new city. It is remarkable that the Fauchery-Daintree collaboration produced such high-quality photographs so early in the history of photography, providing a rare and invaluable record of life in Victoria in the late 1850s. This is the only such collection known to have been produced in Australia in the 1850s.

Early in 1859 Fauchery departed Melbourne for further adventures in the Philippines. He was next heard of in China where he joined the French Expeditionary Forces as war correspondent and official photographer, and took part in the Second Opium War which resulted in opening China to the West. He sent reports from October 1860 to February 1861, again as letters, to Le Moniteur Universel in Paris. These were serialized as Lettres de Chine, and record such historic events as the surrender of the Taku Forts and the taking of the Summer Palace in Peking by French and British forces. Unfortunately any photographs which may have been taken by Fauchery in China have not been found.

On 12 January 1861 Fauchery embarked at Shanghai for a voyage to Japan on board the P&O steamer Cadiz. Only three months after his arrival he died in Yokohama on 27 April 1861, at the age of 37. He was buried in the Foreign Cemetery at Yokohama, a burial ground which was destroyed in the great earthquake of 1923.

First-hand reportage of life in Victoria in the 1850s is sparse, thus making Fauchery’s reflections of his experiences all the more fascinating and valuable. The great interest in his work is due largely to the non-Anglo-Saxon viewpoint he expressed in his letters and photographic images.

Antoine Fauchery, a minor figure in the bohemian circles of the Paris of Napoléon lll, was an artist, writer and traveller who contributed much to the recording of history during his short life. From his experiences in Victoria, he published a lively account of his own life on the goldfields, and his interest in the magical new science of photography contributed to the production of an important pictorial record of the young colony. His first-hand correspondence from China, at the critical time of its opening to the West, complements his earlier writing and the total canvas of his work provides a fascinating insight into the perspective of a nineteenth-century continental adventurer.