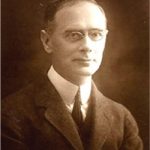 George Gibb Nicholson (1875–1948), philologist and professor of French, was born on 20 September 1875 at Chorlton-cum-Hardy, near Manchester, England, third son of Donald Nicholson, cashier and later bank manager, and his wife Euphemia Scott, née Gibb. The family migrated to Tasmania in 1883. Mrs Nicholson, who had conducted a  successful private school in Aberdeen, Scotland, was principal of the Launceston Training College. George was educated there before attending the University of Sydney where he graduated in 1899 with first-class honours in English, French, German and philosophy and the University medal in logic and mental philosophy. Awarded the James King of Irrawang travelling scholarship, he went to Balliol College, Oxford (B.C.L., 1902). In vacations he explored France (touring Brittany on a bicycle) and acquired a good mastery of spoken French. After Oxford, Nicholson attended lectures at the Sorbonne, Paris, but was never formally trained in Romance philology, his major research field.

In 1903 Nicholson was appointed assistant lecturer at the University of Sydney under (Sir) Mungo MacCallum, professor of modern literature; he also taught philosophy at St Andrew’s College (1904–1905). In Adelaide, on 26 August 1905, he married Marguerite Marie Danuser,  from Geneva; French was always spoken in their household. He was promoted to assistant professor in 1913. From August 1914 Nicholson was an assistant censor in Sydney and, although volunteering for active service, was district censor from April 1916 until January 1919. He graduated M.A. in 1920 and that year was appointed C.B.E.

His first scholarly book, Recherches Philologiques Romanes (Paris), published by the reputable academic publisher, Champion, appeared at the time of his appointment in 1921 to the new McCaughey chair of French. This book laid the foundations of his highly controversial international reputation as a philologist. In 1934 the French government appointed him chevalier of the Légion d’honneur. He continued to publish scholarly work in reputable overseas journals and in 1936 his second major book, Un Nouveau Principe d’étymologie Romane (Paris) appeared; it provoked more polemics—Nicholson revelled in defending his theories against his critics on both sides of the Atlantic.

A man of many contradictions, Nicholson left an ambivalent academic and educational legacy. The holder of the first modern language chair in an Australian university, he raised the study of languages to a level of rigour and professionalism unheard of before him. His austere vision was reflected both in his personal demeanour and his educational philosophy. Shy, reserved, distant, forbidding and totally uncompromising, he was known among students as ‘Old Nick’, ‘Gee-Gee’ and the ‘polite executioner’ (his courtesy and indeed his kindness having never been questioned). Nicholson was frequently on a collision course with the Department of Public Instruction as well as the university’s administration, and in the second half of his tenure, he increasingly withdrew from university life and politics .

As a teacher he was best remembered for his exacting standards of accuracy in assessing ‘prose translation’ (into French) which he considered to be the supreme test of his students’ linguistic competence. Phonetics and dictation were also essential components for the curriculum, and his own Introduction to French Phonetics (1909) remained for many years a standard textbook. But his literature courses were mainly a pretext for more translation work as well as rote learning of literary history. All in all, his perfectionism had an inhibiting effect on those trained under him.

Those close to Nicholson, however, like his former student and counterpart at the University of Melbourne, A. R. Chisholm, learned to appreciate his undisputed integrity and sense of humour, and held him in deep affection as ‘a great, simple, upright, modest man’. From 1908 ‘and for many years afterwards’ Chisholm recalled that Nicholson ‘looked about forty; he was dark, lean, ascetic in appearance. He wore dark-rimmed pince-nez that added to a general impression of severity’.

During World War II Nicholson acted briefly as chief censor and he retired from his chair at the end of 1945. Appointed emeritus professor, he spent his last years in the family home at Hunters Hill. Survived by his wife, daughter and son, he died on 22 December 1948 and was cremated with Anglican rites.

The Nicholson legend, with its emphasis on an almost obsessive cult of accuracy, fails to account for what was profoundly innovatory in his approach to the study of foreign languages. He was deeply committed to the teaching of French as a living language. His emphasis on conversation classes, the study of phonetics and free French composition should be seen in this light. His concern ‘to afford practice in the narration of events familiar to the student and in the expression of a personal view of everyday topics’ was astonishingly modern. Nicholson brought well-qualified native speakers to the university for two to three years, to give students an opportunity to hear up-to-date French. He also apparently suggested the establishment in 1923 of two French government scholarships which, with the foreign language teaching assistantship scheme set up in 1909, provided graduates with opportunities to undertake advanced study abroad. Nicholson visited France five times to pursue his ‘researches in Romance philology’ and ‘improvements in modern language teaching’. Anxious to develop his own proficiency, in Paris in 1936 he confided to Chisholm: ‘I envy you’ for ‘the way you can let yourself go in French … I am always watching myself in case I should make a mistake; and that stops my spontaneous enjoyment of a conversation’. It is equally paradoxical, but consistent with his commitment to the teaching of French as a living language and to ‘thinking in French’, that this most loyal of British subjects invariably sent his best students to French universities for further study and systematically preferred continental journals and publishers for the dissemination of his own research.

Image: From the collection of the late Miss Margaret Nicholson, approved by the author.