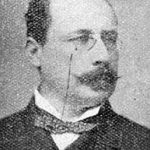 Max O’Rell (Léon-Pierre Blouet, or Paul Blouet) was a French author, journalist and lecturer who visited Australia on an extensive lecture tour in 1892. He subsequently reworked his experiences in a travelogue entitled John Bull & Co.: The Great Colonial Branches of the Firm, presenting a rather negative image of Australia to his international readership.

O’Rell was born in 1847 in Avranches (Normandy) to the merchant Darius Blouet and his wife Aimée Proquez. At the age of twelve, he moved to Paris where he attended collège and the conservatoire before graduating from the Sorbonne in 1866. Initially he pursued a military career which led him to be involved as a lieutenant in the Franco-Prussian war in 1870 and the defeat of the Paris Commune in 1871. Honourably discharged as the result of injury, he turned to journalism, but found few prospects in Paris. He left for London in 1873 to become the foreign correspondent of a small Paris newspaper. In 1874 he accepted the post of French master at a prestigious London boys’ college, St. Paul’s, where he taught until 1885. In the same year, he married Mary Bartlett (born in 1854), an Englishwoman and fellow teacher. They had two children, a daughter Léonie Blouet, born in 1875, and a son Albert who died in infancy.

In 1883, Blouet published a humorous account of English society, John Bull et son Île, under the pseudonym Max O’Rell. The translation of this book, John Bull and his Island, became an immediate bestseller not only in Paris, but also in London and the United States of America. The phenomenal success of the book, with 750,000 copies sold worldwide, encouraged O’Rell to produce further collections of amusing anecdotes such as Les filles de John Bull (John Bull’s Womankind) in 1884 and Jonathan et son continent (Frenchman in America) in 1889.

O’Rell also took to the lecture platform, touring England and the United States. A very talented performer and astute businessman, he was able to command impressive fees. In his books and lectures, he crafted an image of himself as the Latin ‘connoisseur’, bridging cross-cultural differences through humour. When O’Rell put the impressions of his first American lecture tour on paper, he was offered a record sum by his New York publishers for Jonathan and his Continent (1889) and received an even bigger fee for Frenchman in America (1890) in which he reworked the experiences of his second tour of the US.

Following his third successful American lecture circuit, the French author began a tour of Australasia, India and South Africa in 1892. The tour had been arranged by the Melbourne-based impresario R. S. Smythe. On 26 April 1892, O’Rell arrived in Sydney where he lectured for two weeks. He was very satisfied with the ticket sales and the social activities surrounding his visit. O’Rell then left for Melbourne, where he arrived on 14 May 1892. His hugely successful lectures were framed by social events such as a dinner with the State Governor and a reception at the Alliance Française.

After delivering 25 lectures in Melbourne and Sydney, Max O’Rell left for Ballarat, and then proceeded to Bendigo and Castlemaine. R. S. Smythe had organised a comprehensive travel schedule: O’Rell not only lectured in many country towns of Victoria and New South Wales, such as Geelong, Euroa and Broken Hill, but went as far as South Australia and Queensland. After touring several provincial towns of Queensland, the French lecturer worked his way down the eastern coast of Australia and was back in Sydney for another, shorter series of lectures at the beginning of October 1892. The Governor of New South Wales even came to listen to Max O’Rell for a second time.

In December 1892, O’Rell toured Tasmania. He crossed from Hobart to Bluff in New Zealand on New Year’s Eve, 1893. He returned to Sydney at the beginning of March 1893 and planned to lecture in several Western Australian cities before sailing for South Africa on 10 March 1893.

Despite his great success, Max O’Rell does not seem to have warmed to Australasia and its people. His travelogue John Bull & Co. contains many harsh criticisms of Australians. He was more severe with Australia than with any other place he wrote about. Apart from some Sydneysiders and Melburnians, whose intellectual but unpedantic society he appreciated, he believed the British colonials to be provincial, narrow-minded and pretentious and he found the country towns dull and surrounded by sad-looking landscape.

The reasons for O’Rell’s negative presentation may lie in the fact that the hectic lecturing schedule left him depleted and exhausted. Furthermore, Australia was not an important sales market for his books. The reaction of the Australasian press to O’Rell’s critical travel account was quite subdued.

O’Rell continued to lecture and write books but his fame had reached its zenith in the mid-1890s when he engaged in an open feud with Mark Twain over the public image of French women. After his death in Paris in 1903 he and his work fell into relative oblivion.