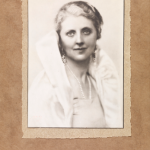 Louise Berta Mosson Dyer (later Hanson-Dyer) (1884–1962) music publisher and patron of the arts was an extraordinarily significant figure in Australian cultural history. Born Louise Smith in Melbourne, daughter of bohemian medical practitioner and politician, Louis Lawrence Smith and his second wife, Marion Jane Higgins, Louise had a privileged but fairly liberal upbringing. She attended the Presbyterian Ladies’ College, East Melbourne, and studied piano at the Albert Street Conservatorium followed by the Royal College of Music, London and the University of Edinburgh. She had French relatives on her father’s side and from a very young age attended classes at the Alliance Française de Melbourne.

In 1911 she married James Dyer, a Scot living in Melbourne, who had made a fortune from importing linoleum; he was the Australasian manager of the Scottish linoleum company, Michael Nairn & Co.  Much older than Louise, he too was interested in the arts.

With her husband’s support, Louise became a significant patron of the arts, in particular of musicians but also writers. She was a leading and flamboyant figure in social and cultural milieus in Melbourne, putting on concerts and lectures. In 1922 she became president of the Alliance Française de Melbourne and was made its honorary president for life in 1927. In 1923 she was named Officier de l’Instruction Publique for her contribution to French national education and culture in Australia.

In 1927 the Dyers left Australia for Europe. They went first to England where Louise became very friendly with Gustav Holst, but in 1928 they settled permanently in France. From her arrival in France, Louise also began writing a fairly regular newspaper column for the popular Melbourne newspaper, The Herald, which she kept up during the 1930s; her ‘brief’ from the editor of the paper, Keith Murdoch, was to provide a ‘broad-brush commentary on life and movement in France’. Some of these articles were purely cultural, such as ‘Music In Paris–the Centenary of Couperin’ (The Herald, 13 July 1933, 29), while others, especially later in the decade, became more political, such as ‘The Antechamber of Paradise’, on Spain on the eve of the outbreak of Civil War (The Herald, 20 June 1933, 35) or ‘A Woman Sees the Crisis’, on the atmosphere in Paris following the Munich Agreement (The Herald, 12 October 1938, 20).

Louise Dyer was asked to represent Australia at the World Conference of the Alliance Française in Paris in 1931. At the Conference she made a proposal to spread knowledge of France to Australia through the creation of gramophone records covering French artistic and scientific achievements to be recorded by significant contemporary figures in science, music, painting and, curiously, the colonies. The discs were to be distributed to Australian schools through the Alliance Française. Unfortunately, the whole scheme came to nothing, chiefly because Louise could not get Australian customs to budge from their prohibitive taxes on foreign books and recordings.

In 1931 Louise established her famous music publishing house, Les Éditions de l’Oiseau-Lyre, in Paris by publishing the complete works of François Couperin to coincide with his bi-centenary. She published the twelve volumes of her Couperin edition over two years—a task that even today seems impossible, especially since in the middle of the production period, in March 1932, Dyer returned to Melbourne to act as Lady Mayoress for her unmarried brother, Harold Gengoult Smith. While there she celebrated the tercentenary of Lully by putting on a performance of his Mariage forcé and scenes from Cadmus et Hermione. The French government appointed Louise Dyer a Chevalier de la Légion d’honneur for her services to French music in 1934 and she was promoted to officier in 1957.

Although l’Oiseau-Lyre first specialised in early music, mainly French and English, Dyer later branched out into both French and Australian contemporary music. She published Australian women composers Margaret Sutherland and Peggy Glanville-Hicks, and the promotion of women became an important arm of her cultural activities. L’Oiseau-Lyre went on to publish some of the most beautiful editions of music ever produced. Dyer’s aim was for her scores to also exist as aesthetic objects in the present and as objects that would last. She used high-quality materials and her modern cover designs were strikingly contemporary.

In 1938 Dyer began producing recordings under the l’Oiseau-Lyre label, reaching beyond French and English music and specializing in previously unrecorded repertoire. In 1949 l’Oiseau-Lyre became the first French recording company to issue 33 rpm LPs entirely produced in France. The recording branch of l’Oiseau-Lyre was sold to DECCA in 1970, a fact often not known since DECCA continued to use the l’Oiseau-Lyre name for their early music recordings.

James Dyer died in January 1938, and the following year Louise married a 30-year-old Englishman Joseph (Jeff) Birch Hanson, who had studied French literature at the Universities of Melbourne and Paris. During the war the couple retreated to Oxford and on their return to Paris in 1945, they moved l’Oiseau-Lyre to Monaco. Louise died in Monaco in 1962. In her will she bequeathed the bulk of her Australian estate to the University of Melbourne.

Jeff Hanson continued the business and on his death, his second wife Margarita Hanson continued the press; all the company’s publications from 1979 to 2013 were produced with financial assistance from the University of Melbourne. The press finally closed in 2013. The Éditions de l’Oiseau-Lyre archive is now part of the Rare Music collection of the University of Melbourne Library, and the remaining printed music is administered by the Melbourne Conservatorium of Music.

It is possible to see expatriatism not as a deliberate turning of one’s back on country but as a dialectic process between home and away (Speck, 2013). Dyer played a significant role in the transnational cultural relationship between Australia and France. Her principal residence from 1927 onwards may have been France but she aimed to share with Australians all she was doing in France, and she was a continuing presence in Australian cultural life even when absent. The gesture she made with the presentation copies of her Couperin edition typifies this, when she stated that ‘Number One went to the President of the French Republic; Number Two goes to my own homeland library’ [State Library Victoria]. The two countries were equally dear to her heart.